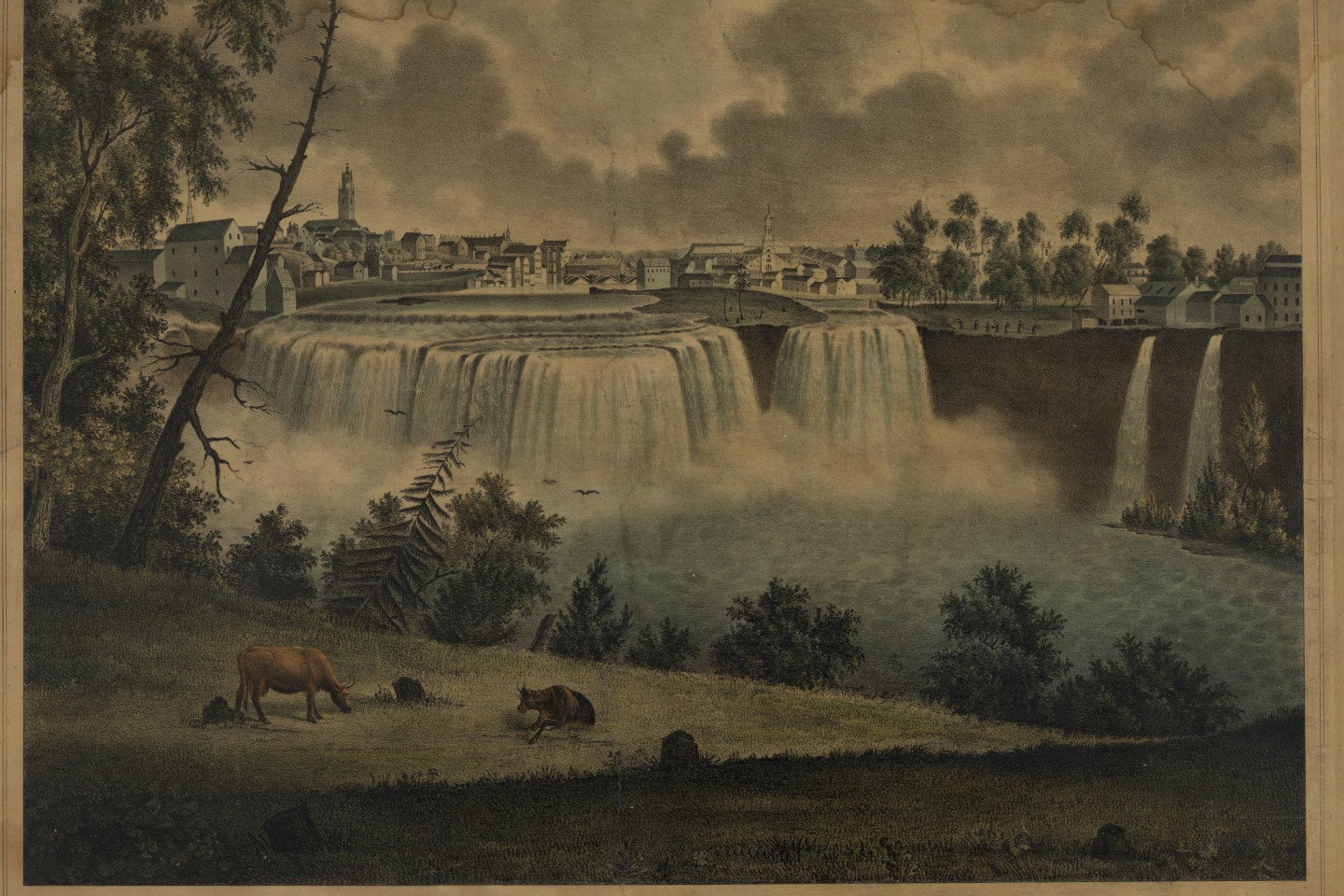 “The upper falls of the Genesee at Rochester, N.Y., from the east.” Lithograph, 1836

As Abby and I traveled east through the quiet farmlands and serene towns along the Erie Canal, it was hard to remember that the region had once been known as the “burned-over district.” Religious revivals, reform movements, and political conflict had blazed across the landscape from the 1820s through the 1850s, shaping American history in ways both immediate and lasting.

We became alert to brown signs, the indicators of parks, museums, and markers devoted to history. These markers trace a network of historical interpretation across the country, sending signals to those attuned to the frequencies of the past. We were unable to follow all the leads that seemed promising. But we did go out of our way to visit one site that ended up returning little reward for the trouble.

The Quakers in this region played starring roles in many of the movements I recently wrote about, so I was eager to see the 1816 Quaker Meeting House in the town of Farmington. When we finally arrived, we discovered what was essentially a huge cube with no windows, with no visitors allowed inside. It turns out the building was in the midst of a federally funded restoration project, and had been covered with metal sheeting.

Because history is always under destruction, construction, and revision, we missed out on other places I was eager to see but no longer existed. Rochester had been important to Frederick Douglass. From 1847 to 1872 — 25 critical years of the nation’s history — he published his newspaper from the booming canal city, and in 1852, delivered his famous speech, “What to the Slave is the Fourth of July,” at Rochester’s resplendent Corinthian Hall. From Rochester, too, Douglass worked with Harriet Tubman and others to aid fugitive enslaved people escaping the U.S. for Canada.

The places Douglass lived and worked, however, no longer stand. In their absence, Rochester has created a tour of 13 sites, marked by statues and QR codes, that commemorate important landmarks of Douglass’s time in the city. The tour is an ingenious way to trace a path of memory now invisible on the landscape.

Rochester’s most powerful reminder of Douglass is a large statue in Highland Park. Sculpted in 1899, the statue was the first to be dedicated to a Black American individual. Moved several times over the decades and now in a lovely spot near an amphitheater, the work retains its power. Douglass’s figure is larger than life — eight-feet-tall atop a nine-foot granite base. Eloquent quotations from Douglass appear around its base.

One quotation seemed particularly brave and hopeful. In 1857, in the wake of the Supreme Court’s Dred Scott decision, which declared that Black people held no rights that white people were bound to respect, Douglass proclaimed that “I know of no soil better adapted to the growth of reform than American soil.” Douglass had traveled and spoken widely throughout Great Britain, to immense and admiring crowds, while he had often faced ugly insults and violence back home. He understood better than anyone the depths of hatred and contempt on the soil of the nation. Yet somehow he retained his belief in the nation that had enslaved him, based on his faith that the opening words of the Declaration of Independence would eventually prevail. His words inspire more than a century and a half later.

A quite different statue rests in another part of Rochester. Douglass’s figure there sits at a table bearing tea cups and books. He is conversing with a woman, both gesturing as if they are speaking. That woman was Susan B. Anthony, a leader of the crusade for women’s rights and suffrage. She lived nearby for much of her adult life, and her house still stands. She and Douglass were allies for decades, not always in agreement. The bronze ensemble was installed in the park at the beginning of this century, welcoming visitors to participate in the conversation.

Abby and I toured Anthony’s home with a welcoming guide. The house evoked Anthony’s life and struggles, and contained original furniture and black clothing appropriate for a Quaker woman of her time. Abby and I had lunch at the 1872 Cafe around the corner, named for the year Anthony and her allies were arrested for attempting to vote in Rochester. Though the commemorative date violated the chronological boundaries of our journey, we were happy to make an exception.

Inspired by Anthony’s story, we were eager to visit Seneca Falls, an hour to the east. The canal town of Seneca Falls seemed an unlikely location for the most significant event in the women’s rights movement. Elizabeth Cady Stanton was a young mother of three when she helped initiate the 1848 convention at Seneca Falls. She had traveled to London on her marriage trip in 1840 to attend an international antislavery convention, and was infuriated when the English organizers of the event refused to permit the female American delegates to speak or even sit with the male delegates. Stanton had met the Quaker activist Lucretia Mott on that journey, and they now allied to take steps toward women’s equality in the United States.

They were not able to do so, it turned out, until Stanton moved to Seneca Falls and Mott was visiting family nearby. Quaker women in the region, guided by the inner light of their faith, recognized no distinctions among people based on sex, skin color, or status. Stanton joined with them, on two weeks’ notice, to write a Declaration of Sentiments, asserting that the guarantees of freedom in the Declaration of Independence also applied to women.

Three-hundred people attended the convention, and 100 signed a resolution in support of its principles. Frederick Douglass, the only Black person in attendance, was one of those who signed. Two weeks later, with Douglass helping to spread the word with his newspaper, a second, larger convention met in Rochester. In 1851, Stanton and Susan B. Anthony were introduced in Seneca Falls, the moment now commemorated with another statue. They would work together for the next four decades, leading the fight for women’s rights.

The National Park Service (NPS) offers a powerful experience at the Wesleyan Chapel in Seneca Falls, where the convention took place. The chapel was repurposed many times over in succeeding generations, even becoming an auto repair shop. But the NPS carefully shored up the remaining walls from 1848, and replaced missing portions to restore the building to its original size. Inside, murals recreate the sense of excitement at the iconoclastic meeting, faces looking down from the balcony to see the debates unfolding below. Stanton, Douglass, Mott, and Thomas and Mary Ann M’Clintock lead the proceedings on the stage.

A young park historian in the restored chapel gave an excellent overview of the convention, her explanations helping visitors understand how the networks among abolitionists and Quakers had enabled such an important meeting to come together so quickly and effectively. In the visitor center next door, exhibits put the Seneca Falls event into a larger context, connecting with 20th-century victories and setbacks in the struggle for women’s rights. Abby joined a group of attendees at the 1848 session, trying to blend in as best she could.

The restoration of the endangered building in Seneca Falls, like the installation of the Frederick Douglass statues in Rochester and the restoration of the Quaker Meeting House in Farmington, demonstrates the devotion of many Americans to telling a full story of our history, one that includes dissent and nonconformity as key parts of this nation’s identity.

This is the ninth installment in Discovery of America: A Journal, a travelogue documenting my visits to public history sites around the country. Read the rest of the series here.