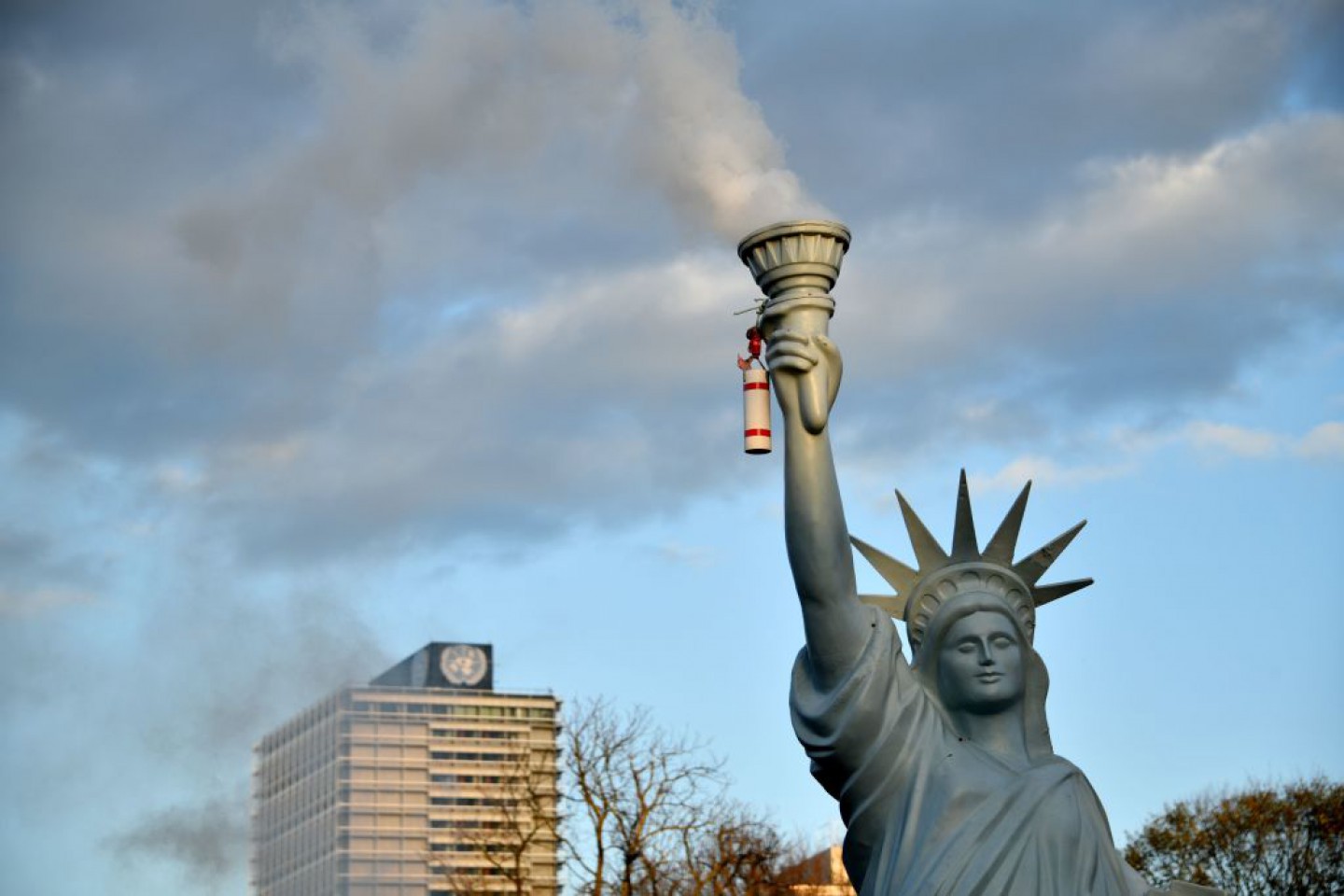 A mockup of the Statue of Liberty with smoke coming out of her torch erected by protesters in Bonn, Germany, in advance of the 2017 UN Climate Change Conference. (Nov. 4, 2017)
SASCHA SCHUERMANN/AFP/Getty Images

At a November U.N. gathering in Bonn, Germany, delegations from all countries party to the 2015 Paris Agreement on climate change met to hammer out technical details and assess progress to date. Much media attention, however, focused on the elephant who was not in most of the rooms there: the United States. Nearly six months after the Trump administration announced plans to withdraw from the Paris agreement, it was still unclear what the impact of Trump’s move would be. One New York Times headline put it: “As the U.S. Sheds Role as Climate Change Leader, Who Will Fill the Void?”

Implicit in the Times headline is the notion that the U.S. has been an effective leader in climate policy up until now. But at least when it comes to the critical issue of the costs associated with reducing carbon emissions and adapting to climate change, history does not bear that notion out. Though President Trump has been more brazen in his unwillingness to foot the bill, past administrations have rarely been willing to lead climate policy with their checkbooks.

After World War II, countries around the world pursued rapid economic growth. This was especially true of the so-called “developing countries” of the Global South, who viewed rapid development as a necessary response to a history of colonialism, exploitation, and an international order that favored wealthy industrialized countries over poorer agricultural producers.

At the same time, environmental activists in the U.S. and Western Europe worried about the ecological consequences of growth, linking the destructive aspects of development at home to decolonization and the push for development abroad. They feared that developing countries would experience rapid population growth, generate widespread pollution, and exhaust vital resourcse, sparking a global ecological crisis.1

Environmentalists set their sights on the expansion of protected areas in the developing world, as well as more stringent regulation of pollution and natural resource extraction. But they struggled to persuade developing countries to take action. Those nations tended to view environmental protection as a scheme deployed by wealthy countries to undercut their development and impinge upon their sovereignty. Many in the Global South saw an unfair double standard: industrialization in wealthy countries, after all, had been fueled by dirty fossil fuels, resource extraction, and the relative absence of constraints on toxic chemical use.2

This North-South conflict pervaded international environmental politics. In the lead-up to the first major U.N. environmental conference in Stockholm, held in June of 1972, wealthy countries and environmental activists demanded global environmental protection agreements, or at the very least, good faith efforts to cut back pollution and resource use. The countries of the Global South, in turn, argued that protecting the environment was a “rich man’s game” that they had little interest in playing until their own basic material needs had been met. They demanded additional aid above and beyond what was already available to support their environmental protection programs, and to compensate for revenue lost in the transition to more ecologically-sensitive forms of development.

During the conference, however, representatives from the Global South fought back.  Delegations from India and Brazil, among many others, repeatedly asserted their development rights and their expectation of increased financial support for additional environmental protection policies. The meeting ended with little progress over how to balance the competing objectives. The wealthy countries made vague promises of increased aid and some compensation, but in the ensuing years the Global South rarely received either.

Two decades later, a new issue was front and center for environmentalists: global climate change. In 1992, representatives from around the world convened in Rio de Janeiro to negotiate the U.N. Framework Convention on Climate Change. But old conflicts persisted.  “When the rich chopped down their own forests, built their poison-belching factories and scoured the world for cheap resources, the poor said nothing,” proclaimed Malaysia's prime minister, Mahathir Mohamad, who bristled at the thought of international agreements that would hamstring poor countries’ ability to grow as they saw fit and not compensate them for their losses.5

Such arguments persuaded few in the wealthy countries. The U.S., in particular, took a hard line against any major increases in aid. As President George H. W. Bush prepared to leave for Rio, he told reporters, “I’m determined to protect the environment.” But he added, “I’m also determined to protect the American taxpayer. The days of the open checkbook are over.” When, exactly, the checkbook had ever been open to developing countries was left unsaid.

Negotiators in Rio did manage to create new financing institutions, such as the Global Environmental Facility in the World Bank. Many delegates from the Global South, however, claimed the funds available — $1 billion initially —were insufficient, and worried that the U.S. retained too much influence over Bank policy. Wealthy countries also recommitted to the longstanding UN target of allocating 0.7 percent of their gross national income to foreign aid. In the years since Rio, only a few northern European countries and the United Kingdom have actually met that target.

Debates over North-South financing continued to undercut subsequent negotiations. The U.S. remained at the center of the problem. In anticipation of 1997 climate convention in Kyoto, the Senate passed a resolution asserting that the US would refuse to sign any agreement that required poor countries to do less to cut greenhouse gas emissions than their rich counterparts. Sure enough, the non-binding Kyoto Protocol that emerged from those meetings did not include the U.S. among its signatories.6 As one Swedish diplomat put it, “the problem of how to break out of the North-South impasse remained the challenge in the UN process” of negotiating a truly global agreement.7

This pattern continues. In the lead-up to the Paris talks in 2015, wealthy countries – led by the United States under the Obama administration - promised $100 billion per year in climate aid. Yet the offer garnered little support from poorer countries without more concrete details about when and how the money would arrive. For all the excitement around the creation of the Paris Agreement, astute observers noted how little progress occurred on the financing issue. The Obama administration granted around $2.7 billion a year in climate financing, but that amounted to far less than .001 percent of U.S. GDP, and a fraction of what American shoppers spent in the days following this past Thanksgiving. In November, negotiators in Bonn once again could only agree to punt the question of paying for a climate agreement to subsequent discussions.

In recent weeks, there have been some encouraging signs that other wealthy countries might be willing to increase their climate funding. Last month, French President Emmanuel Macron spearheaded a meeting on financing issues, while the UK offered to double its contribution to international climate research. Germany offered a modest but significant $50 million pledge to the new Adaptation Fund to help the Global South.

But the scaffolding for future cooperation remains uncertain. Not only is there little agreement on the amount of funding necessary for meaningful climate finance; disputes also remain over how to document what is already being spent. There was a small provision in the Paris Accords requiring wealthy countries to specify the timing and scale of their financing, but there were no set guidelines on how to do so. In Bonn, representatives from Global South countries bristled that reporting standards were “voluntary,” and hence unenforceable. Despite late-night negotiations, countries could only agree to continue discussing the issue.

Thus the developed world’s longstanding inability to sufficiently address the financing question gives us a broader perspective on the Trump administration’s recent intransigence on climate policy. For seven decades, global environmental negotiations have been bedeviled by the legacies of colonialism, persistent inequalities in global wealth and power, and debates over the balance between global imperatives and national. Taking this history seriously means confronting the fact that the biggest challenges to combating global climate change are not technical. Rather, they are political questions about finding solutions that all parties feel are just. After all, the countries that bear the most responsibility for climate change are the ones in the best position to adapt to it, whereas the ones least responsible are the most vulnerable. Being honest about the long-term obstacles to positive change is the first step to overcoming them.

[7] Lars-Göran Engfeldt, From Stockholm to Johannesburg and Beyond: The evolution of the international system for sustainable development governance and its implications (Stockholm: Ministry of Foreign Affairs, Sweden, 2009), 203-4.