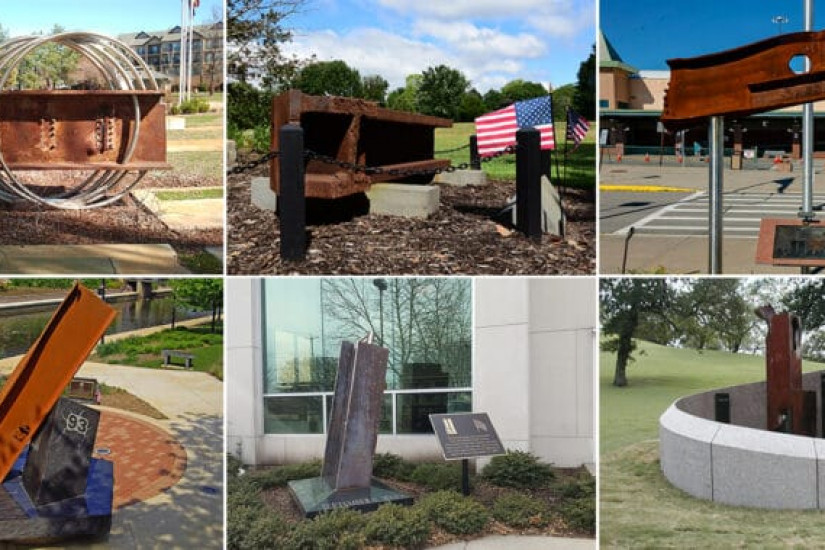 Starting in 2009, the Port Authority of New York and New Jersey, owner of the World Trade Center properties, created an elaborate gifting process by which to handle 9/11 steel. Since then, less than one percent of the total steel recovered from the WTC has gone to memorials. Still, more than 1,800 pieces have been distributed, to sites in all 50 states and more than a dozen abroad. 3 Only a few of the American memorials are in major cities. Most have been erected in liminal spaces between suburban office parks and parking lots, at the centers of traffic circles, outside public buildings in small towns. The majority lack any plinth or landscaped surround. The steel column at the Fire Training Center in Overland Park, Kansas, for instance, stands a stone’s throw from the “burn buildings” used in fire training — a jarring juxtaposition. The “fallen cross” sunk into a field in East Meadow on Long Island is accompanied by a sign stating that it is an ACTUAL WORLD TRADE CENTER STEEL ARTIFACT. The section of square column displayed outside the National WWII Museum in New Orleans weighs five tons, but resembles nothing so much as an open trash bin.

A few memorials, like Bennett’s Tribute to Firefighters, were conceived in the months following the attacks. But most were created in the lead-up to the ten-year anniversary. These installations physicalize and parcel out the memory of the towers and their destruction. In doing so, they situate the attack in public consciousness not only as a shared loss but as the opening salvo in a war — support for which, a decade on, needed shoring up. The regional monuments concentrate overwhelmingly on the 343 firefighters and 71 law-enforcement officers who died on 9/11, prioritizing a narrative of blue-collar male heroism and sidelining other victims, such as the 73 restaurant workers lost at Windows on the World, or the 658 financial-services workers who perished at the firm of Cantor Fitzgerald.

The process of this steel’s salvage and distribution across the United States speaks to the persistent social and political power of relics — parts of bodies or objects imbued with auras from another realm, “spiritual electrodes that transmit waves of sacred energy.” 4 Just 20 survivors were pulled alive from the collapse of the Twin Towers. Of the bodies recovered, just ten percent were intact. The dead were, from the first, spoken about as martyrs, and the rescuers as heroes. Yet there were few remains to mourn or to enshrine. Even in our globalized digital age, the demands of memory remain stubbornly tactile, and alternative death rites were needed.

Relics are not neutral, however. The Crusades were fought, in part, over the meaning and ownership of relics. The dissemination of “relic steel” helped to create some sense of collective closure, to comfort the nation. It also played into flag-pin politics, helping to connect local sentiments to the global War on Terror. Many of the regional memorials thus work by proxy, linking the act of terrorism on domestic soil to a rallying of support for military operations in Iraq and Afghanistan.

As early as the evening of September 11, 2001, trucks laden with debris were pulling away from the smoldering hole that had become Ground Zero, taking the Battery Tunnel to Brooklyn, and crossing the Verrazano Bridge to Fresh Kills Landfill on Staten Island. The landfill had been officially closed ...