For about 1 in 10 people counted for last year's U.S. census, a single check box was not enough to report their racial identities.

Their multifaceted responses to the race question for the 2020 head count helped produce the data released this month for redrawing voting maps, enforcing civil rights laws and guiding federal funds to local communities.

Now, demographers and other researchers are trying to figure out what caused the number of people who identified with more than one racial group to jump over the past decade by an eye-popping 276%.

As experts look at the changing numbers, three main factors have emerged as drivers of this boom.

A growing share of children in the U.S. have been born to parents who identify with racial groups that are different from one another.

For the 2020 count, the Census Bureau changed how it asked about race and how it categorized the answers. (If you wrote in a response that federal standards consider to be "Hispanic or Latino," for example, that answer was sorted into the "Some Other Race" category.)

And more people may be rethinking what they tell the government about their identities. Some demographers are wondering how much a relatively new trend may have contributed to that growth — the rise of at-home DNA ancestry testing.

Exactly how big of an effect these tests had on census results is difficult to pin down. But many researchers agree that as the cost of at-home kits fell in recent years, they have helped shape an increasing share of the country's ever-changing ideas about the social construct that is race.

Although DNA ancestry test takers likely make up a sliver of the U.S. population — 16%, according to a 2019 estimate by the Pew Research Center — the wide reach of the marketing efforts of companies such as 23andMe and Ancestry.com, which operates the AncestryDNA service, should not be underestimated, warns Jenifer Bratter, a sociologist at Rice University who studies multiracial identity.

"The public has kind of taken in the notion that you can find out 'who you are' with a test that's supposed to analyze your genes," Bratter says. "What that does for anyone who does work in racial identity and racial demography is cause us to think through how genetic ideas of race are in public circulation."

"These genetic ancestry tests may be pushing the concept of race to match genetic ancestry more, including information about very distant ancestors, rather than sort of the more contemporary family history or personal social experience," says Sasha Shen Johfre, a Ph.D. candidate in sociology at ... 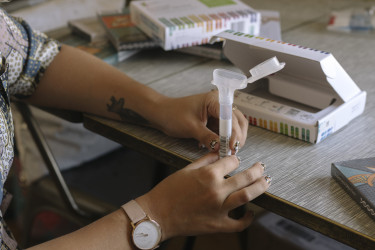 DNA testing kits have shifted the way both researchers and the public think about race and identity. This shift is evident in the 2020 U.S. Census data.
by Hansi Lo Wang via NPR on August 28, 2021