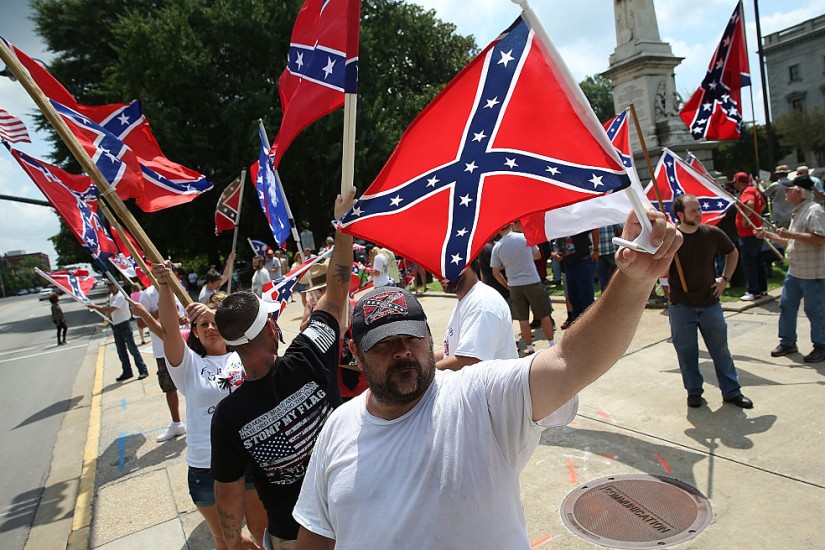 A protest at the South Carolina State House against the removal of the Confederate flag.
Win McNamee/Getty Images
…

For several decades after the Civil War, the Confederate battle emblem was rarely displayed — typically only during tributes to actual Confederate veterans. It was not part of state flags or other official symbols or displays. In fact, the Confederate battle flag was so uncommon that in 1930, Sen. Coleman Livingston Blease had to have one specially made by the Daughters of South Carolina for him to display in his office.

It wasn’t until 1948 that the Confederate flag re-emerged as a potent political symbol. The reason was the Dixiecrat revolt — when Strom Thurmond led a walkout of white Southerners from the Democratic National Convention to protest President Harry S. Truman’s push for civil rights. The Dixiecrats began to use the Confederate flag, which sparked further public interest in it.
Consequently, the flag became strongly linked to white supremacy and opposition to civil rights for African Americans. In 1951, Rep. John Rankin (D-Miss.), a very outspoken segregationist, proudly announced that he had “never seen as many Confederate flags in all my life as I have observed floating here in Washington during the last few months.” Rankin himself wore a Confederate flag necktie to serve as a constant reminder of his opposition to “beastly” integration policies.

In 1954, the Supreme Court’s decision in Brown v. Board of Education, which ordered the desegregation of public primary schools, focused the energies and ire of hardcore segregationists throughout the South. Efforts to resist school integration and other civil rights protections for African Americans included the display of Confederate symbols and especially the Confederate battle flag.