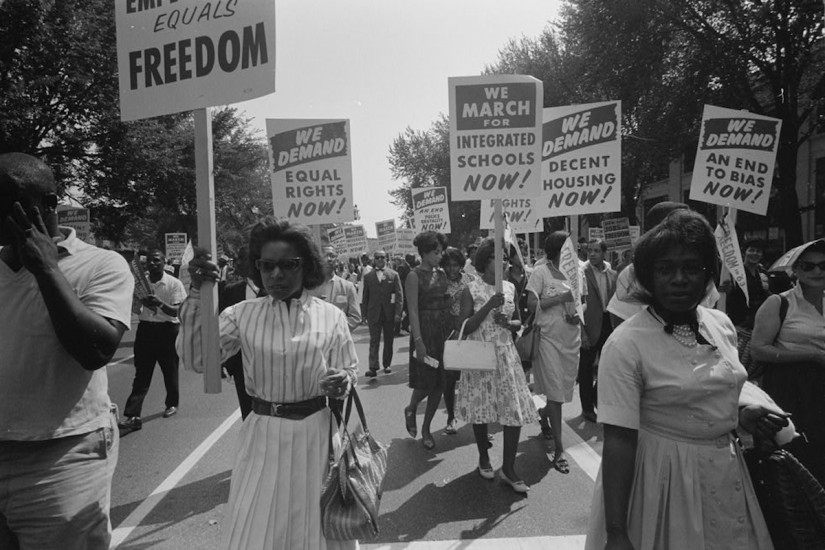 During the 1963 March on Washington, thousands gathered to support racial equality and the civil rights movement. Participants heard from civil rights organizers like John Lewis and witnessed Dr. Martin Luther King’s iconic “I Have a Dream” speech. Just as the 1941 march was a turning point in desegregating federal work and army sectors, many credit the 1963 march with accelerating the passage of the 1964 Civil Rights Act.

Despite their critical roles in the infrastructure, logistics, and planning of both events, male leadership marginalized black women’s voices and subsumed their gendered political priorities under the banner of civil rights. As Dorothy Height, a leading civil rights activist, recalled, “many prominent women were concerned about the visible participation and representation of women leaders in the program.” When she and other women raised this issue, male organizers offered excuses ranging from concerns about the length of the program to the claim that they could not figure out which female representative to choose. Perhaps most insulting was the idea that groups participating in the march had women among their ranks and that this should suffice as adequate representation of women.1

After much deliberation, Height and other women organizers convinced the male leaders to offer notable women activists, including Rosa Parks, “prominent seats on the platform” and program. Daisy Bates, leader of the Little Rock Nine, and Gloria Richardson, a leader in the Cambridge, Maryland civil rights movement, were slated to speak as part of the “Tribute to Negro Women Fighters for Freedom” section of the program. In the short time that they had, these activists could do little more than reaffirm dominant narratives about the march and movement. Bates spoke for roughly one minute, and Richardson had the microphone snatched away from her before she was able to address the crowd. Parks—at this point an icon of the movement—did not speak. As civil rights leader and lawyer Pauli Murray later noted, “Not a single woman was invited to make one of the major speeches or be a part of the delegation of leaders who went to the White House.”2

These same issues resurfaced in the Million Man March held in D.C. in 1995. Nation of Islam leader Louis Farrakhan initiated this march to gather black men together to “atone” and encourage them to take their “rightful” place as heads of the family and household. If the focus of the March on ...