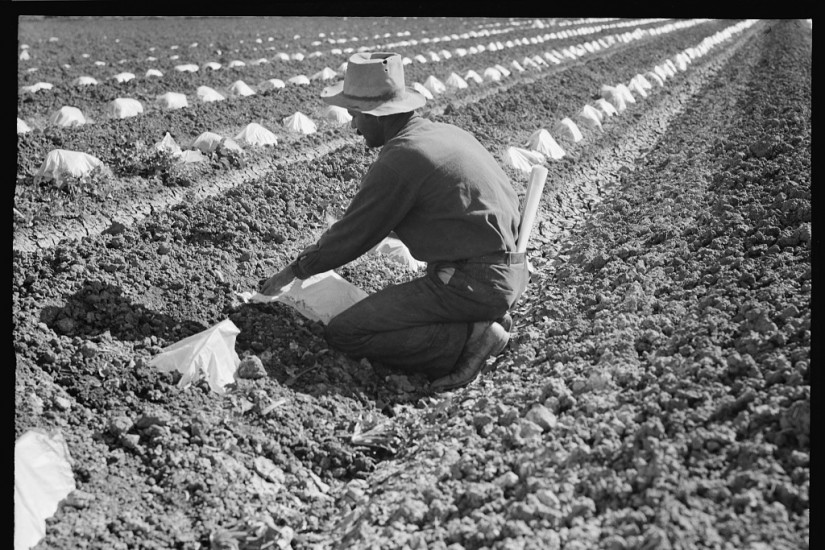 A member of a group of Mexican migrant farm workers thins and weeds cantaloupe plants (1937).
Dorothea Lange/Library of Congress

... agricultural industry while the company abdicates all responsibility for the workers’ well-being. The philanthropist’s role has thus moved, over the course of four decades, from that of labor organizer to that of arbitration board trying to negotiate productivity increases for the good of all.

... agricultural industry while the company abdicates all responsibility for the workers’ well-being. The philanthropist’s role has thus moved, over the course of four decades, from that of labor organizer to that of arbitration board trying to negotiate productivity increases for the good of all.

The subtitle of Kohl-Arenas’s work, How Philanthropy Fails to Alleviate Poverty, may undersell the point; much of the evidence presented in the narrative suggests that philanthropic intervention actually perpetuates poverty. This is primarily achieved by distracting social movement leaders from the task of systemic change. Leaders’ connection to funders takes the form of endless paperwork: grant applications, reports, logic models, data collection, and evaluation.

And then there is the deeper, more fundamentally problematic influence of the philanthropic relationship on social movement organizations. In the constant renegotiation of tactics and goals—away from structural change and toward individual and community change—there can develop, on both sides, a cognitive dissonance. The stated goals of the partnership can never be achieved through the agreed-upon work, leaving grant makers frustrated and grantees burnt out. Funders abandon one failed initiative for the next, churning organization after organization in their wake of largesse and disdain. This system makes liars of us all.

Considering alternative pathways, Kohl-Arenas singles out the Occupy movement and Black Lives Matter as historical standouts of effective organizing for social change in the past two decades. Emerging from two different traditions of social change—one with anarchist roots, the other originated by queer black feminists—these movements have no centralized leadership, no significant ongoing funding sources that require reporting, and no single spokesperson or list of demands. They both would likely subscribe to the Ella Baker motto, “Strong people don’t need strong leaders.” Her book prompts the question: can activists and philanthropists ever successfully collaborate?

This question has been complicated by recent hiring trends in philanthropy. Today, philanthropies are not the cloistered, family-run institutions they once were. No longer restricted to the grantee side of the equation, activists, people of color, and people from affected communities are being hired as program officers responsible for giving out the money that once funded their own innovative work. Beginning with innovators like the Soros Foundations, bolstered by some of the newer health conversion foundations, and epitomized by the 2013 hire of prominent philanthropy recipient Darren Walker to head the Ford Foundation, philanthropy is experiencing its own revolution.

This trend muddies the waters. Who will be setting the agenda for the next generation? Will it be traditional philanthropists, with this ever-growing cadre of program officers and board members? Or economically disenfranchised communities? Written out, the question sounds rather preposterous: a David-and-Goliath battle for the ages, in which Goliath is played by a sea of people looking, with each passing day, more and more like David.

I feel a generational kinship with Erica Kohl-Arenas. She beautifully articulates the promise of equality that seemed woven into the social contract for those of us born to parents of the ’60s, raised as we were to believe that social change was attainable in our lifetime. By the time we emerged ...