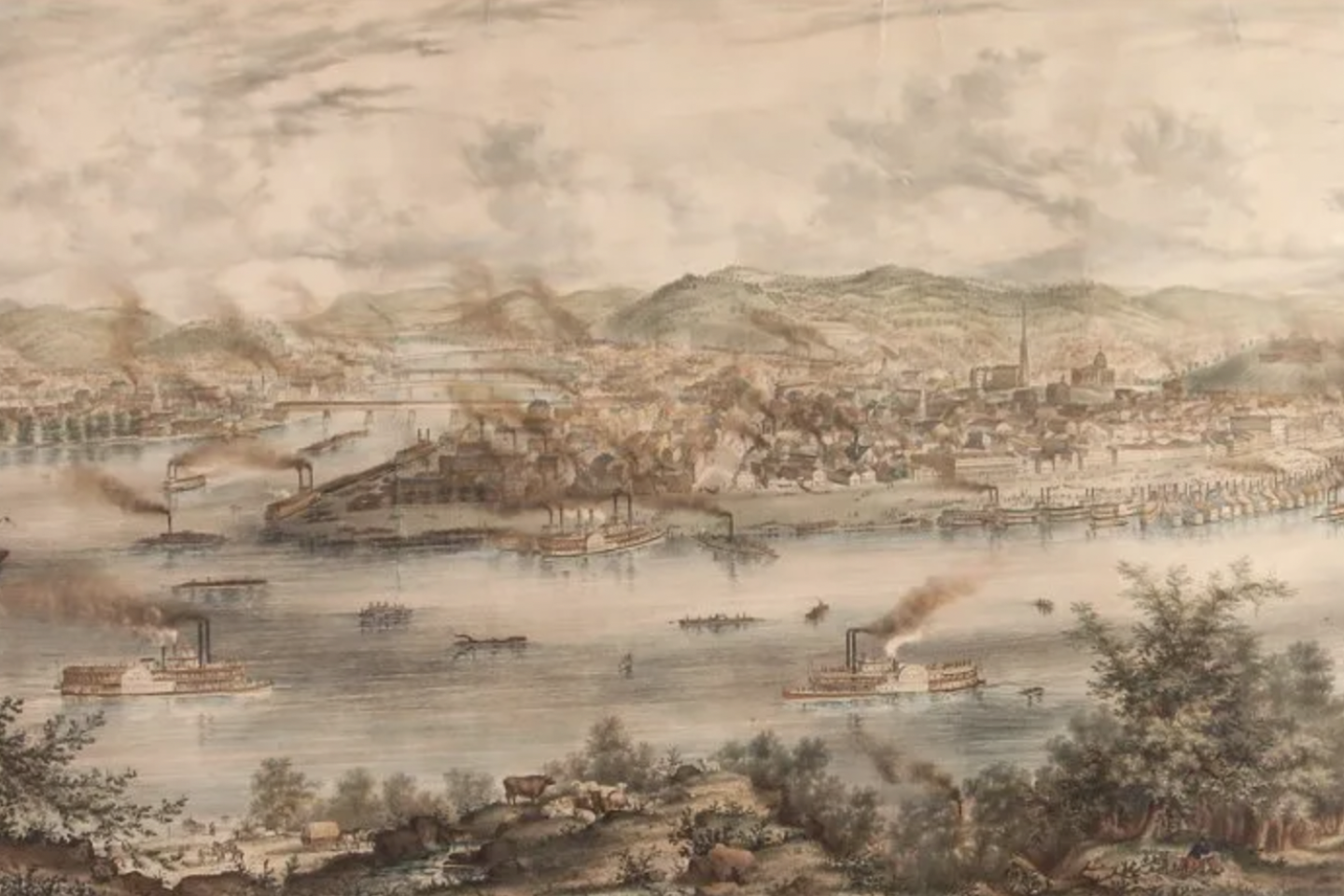 Lithograph of B. F. Smith sketch of Pittsburgh viewed from Coal Hill, 1849

[Editor’s Note: Over the course of 2022 and 2023, New American History Executive Director Ed Ayers is visiting places where significant history happened, and exploring what has happened to that history since. He is focusing on the decades between 1800 and 1860, filing dispatches about the stories being told at sites both famous and forgotten. This is the seventh installment in the series.]

From Harpers Ferry, we set our sights north on Niagara Falls. Conveniently for us, the city of Pittsburgh lies halfway in between the two. If Harpers Ferry revealed how the fabric of memory constantly strains to contain the past, Pittsburgh reveals that history is much more interesting than we usually make it. The city exhibited little obvious drama in the first two-thirds of the 19th century, and yet it embodied fundamental changes in American life.

Those changes have borne many names. In 1951, George Rogers Taylor coined the phrase “the transportation revolution,” and the phrase stuck. In the 1960s and 1970s, historians described a revolution in labor relations, as an ancient system of masters and journeymen dissolved in the face of contract labor. In the 1990s, historians hotly debated the notion of a “market revolution,” in which the individualistic values of the market replaced traditional and communal standards. Daniel Walker Howe, in his 2007 Pulitzer Prize-winner What Hath God Wrought, dismissed the market revolution in favor of a “communications revolution.” In the years since, some historians have focused on “slavery’s capitalism,” emphasizing the implication of the nation’s economy in the bondage of four million people, while others have disputed that notion to stress innovations in agricultural technology, capital markets, and trade flows.

Despite their differences, each approach agrees that an avalanche of change descended on the economic lives of Americans between 1800 and 1860. At the beginning of the century, after all, people could move no faster than they had for a millennia before, at the speed of wind on water or horses on land, and information could move no faster than people. Three generations later, steamships powered across the Atlantic in ten days, railroads raced a hundred miles in a day, and telegraph lines carried messages with the alacrity of electricity. Vast factories employed women and children to produce millions of yards of textiles. Coal powered gas lights in burgeoning cities and fired the boilers of powerful new industrial engines. Newspapers and books poured off presses by the millions. Farms produced mountains of grain with new machines and shipped it around the world. Plantations yoked enslaved labor to vast networks of capital, machinery, and transport.

Textbook generalizations tame these disruptive and sporadic struggles into frictionless processes. Words ending in “ization” — industrialization, urbanization, modernization — replace people with faceless and relentless forces. Bland concepts ignore the devastating economic panics and depressions that descended on the United States in 1819, 1837, and 1859. They underplay the amount of time and degrees of difficulty it required for the railroad and the telegraph to grow into integrated systems. They flatten the geography of the nation, turning “the North” into an industrial region it would not become for decades to follow, portraying “the South” as one giant plantation even though most of its white population lived on family farms, and neglecting “the West” altogether except for the Gold Rush.

Pittsburgh gathers the story of its past at the Senator John Heinz History Center. The museum portrays the transformations of the young United States as far more colorful, dangerous, and consequential than we often make them. And that is even if we ignore the enticing exhibits on Heinz foods and Pittsburgh’s illustrious sports history. (Of course we couldn’t ignore every display, and Abby stopped for a chat with Pittsburgh’s most welcoming resident.)

Pittsburgh grew up with the transformations of the American economy, for it was a product of steamboats. In fact, the first steamboat to navigate the Ohio and Mississippi rivers to New Orleans was assembled in Pittsburgh. There, it attracted crowds before its crew, with the young pregnant wife of its captain standing at its prow, braved the rapids to head south. Pittsburgh turned to coal to power steam engines and warm homes; as early as 1840, a visitor complained that the new city was covered in soot, its air filled with smoke.

The Heinz Center portrayed Pittsburgh’s steam age with powerful and surprising exhibits. It showed a letterhead for a commercial college that offered a “steamboat accounting” course in the 1830s. It displayed shocking illustrations of — and shrapnel from — steamboat explosions, mentioning in passing that “when a boat left the wharf, it had a one in three chance of making it to its destination.” The museum converted an imposing iron boiler into a giant video device.

The Heinz Center also showed that the economic revolutions of the era before the Civil War involved more than heavy machinery. Pittsburgh became famous early on for its glass, which in the 1820s could be found from Maine to New Orleans and into Mexico. In the museum, beautiful displays arrayed flasks, plates, bowls, and windows. Pressed glass from the 1830s was especially striking, its complex facets reflecting the light.

Pittsburgh’s Heinz Center, like all good museums, makes the past concrete and specific. It shows that economic revolutions, whatever we may call them, were waged by people from all kinds of backgrounds and identities. It shows that revolutions came with great environmental and social costs. And it shows that each revolution triggered others to follow.

Most of the products created in the nation’s early industrial cities traveled on water. In the 1830s, moving goods north from Pittsburgh would have required traveling up the Ohio River and then through a southern extension of the Erie Canal, connecting eventually to Lake Erie and the cities east and west. We opted instead for the overland route. But the interstate that we followed with Bertha roughly paralleled the route of that canal extension all the way to Erie. There, we changed interstates and continued on past Buffalo to Lockport, New York, to visit one of the most impressive engineering accomplishments along the route of the original Erie Canal.

At Lockport, the canal had to climb the Niagara Escarpment, a wall of stone that arches from western New York, across Ontario, around Michigan, through the Great Lakes to Wisconsin and Illinois. As its name implies, Niagara Falls plunges over the escarpment into Lake Erie. New York has done a good job of preserving and interpreting the canal across its length, with Lockport especially impressive. It offers not only reconstructed locks but also current-day locks that allow visitors to experience the rise and fall of the water through modern machinery and cruise along the canal. We enjoyed the leisurely navigation through two sets of locks.

The exhibits at the canal site, demonstrating the crude tools, lack of steam power, and the amount of blasting and sheer rock removal that was required, reminds visitors of the degree of difficulty of blasting through 1,100 feet of solid rock, building high walls, and constructing heavy wooden doors in the days before heavy machinery. The “Flight of Five” canals at Lockport lifted boats more than 60 feet.

Two-thousand men worked at the site in the 1820s, most of them immigrants. Engineers invented new tools to enable the construction of the locks, from drill bits and lifts to hydraulic cement. An impressive museum on the site tells the story of the planning, construction, maintenance, and challenges of the canal. I sat with a group of canal workers next to the Flight of Five, the water rushing beside us.

Pittsburgh and Lockport both remind us that the economic revolution of the early 19th century, whether we conceive of it as a transportation, industrial, market, communication, or capitalist revolution, had to be built stone by stone, mile by mile. We need to slow the story down to recall the labor of the humans who made such profound transformations possible.

This is the seventh installment in Discovery of America: A Journal, a travelogue documenting my visits to public history sites around the country. Read the rest of the series here.