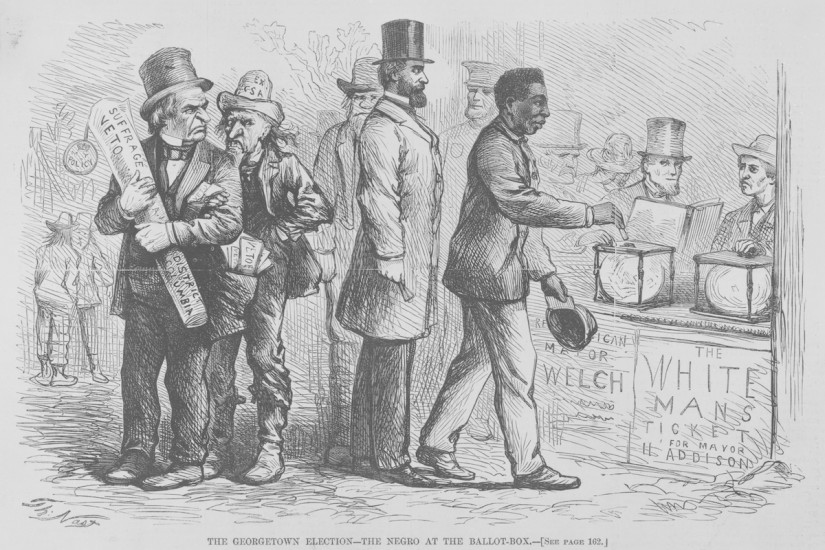 "The Georgetown elections - the Negro at the ballot-box." Cartoon by Thomas Nast, 1867.
Library of Congress
…

The 1888 election was almost a very different turning point for voting rights. As Republicans gained control of the House, Senate, and White House for the first time in a decade, they tried to bolster their party by establishing federal control of congressional elections so they could protect African-American voting rights in the south (and, Democrats charged, block immigrant voting in northern cities). The bill’s dual purposes were embodied in its manager, anti-immigrant, pro-black suffrage Massachusetts Congressman Henry Cabot Lodge. Although the bill passed the House, it died in a Senate filibuster. Democrats swept the House in the fall 1890 elections and soon repealed many of the remaining voting rights provisions.

Those Lodge Bill debates failed to change the national law, but they did convince Mississippi Senator James George that his state should eliminate African-American voters before the federal government stepped in. George orchestrated a state constitutional convention that dramatically lengthened residency requirements, imposed a $2 poll tax, added a literacy test, expanded felonies that disfranchised voters, and added the Australian ballot. “It will never come to pass that the neck of the white man shall be under the foot of the negro, or the Mongolian, or of any created being,” George promised the U.S. Senate. African-American registration in Mississippi soon fell from 190,000 to 9,000; overall voter participation dropped from 70 percent in the 1870s to 50 percent in the 1880s to 15 percent by the early 1900s. Soon almost every other Southern state followed suit. The Australian ballot law “neutralized to a great extent the curse of the Fifteenth Amendment, the blackest crime of the nineteenth century,” an Arkansas official bragged. When states rewrote or amended their constitutions, they — like Alabama — looked to Massachusetts as a guide to restricting votes. “We have disfranchised the African in the past by doubtful methods,” Alabama’s convention chairman said in 1901, “but in the future we’ll disfranchise them by law.” In South Carolina Robert Smalls, one of a handful of black men in the new constitutional convention, pleaded with delegates not to undo his work at the 1868 enfranchising convention, but his arguments fell on deaf ears.

These laws and constitutional provisions devastated voting in the South. When Tennessee passed a secret ballot law in 1889, turnout fell immediately from 78 percent to 50 percent; Virginia’s overall turnout dropped by 50 percent. For African-American voters, of course, the impact was even more staggering. In Louisiana black registration fell from 130,000 to 1,342. By 1910 only four percent of black Georgia men were registered. White planters used their newfound power to create a system of Jim Crow peonage. “If they couldn’t slave the nigger back like he used to be, [disfranchisement] was pointin the nigger in that direction,” Alabama tenant farmer Ned Cobb said. Poll taxes, intimidation, fraud, and grandfather clauses all played their part, but the enduring tools of registration and the Australian ballot worked their grim magic, too, and made voters disappear.