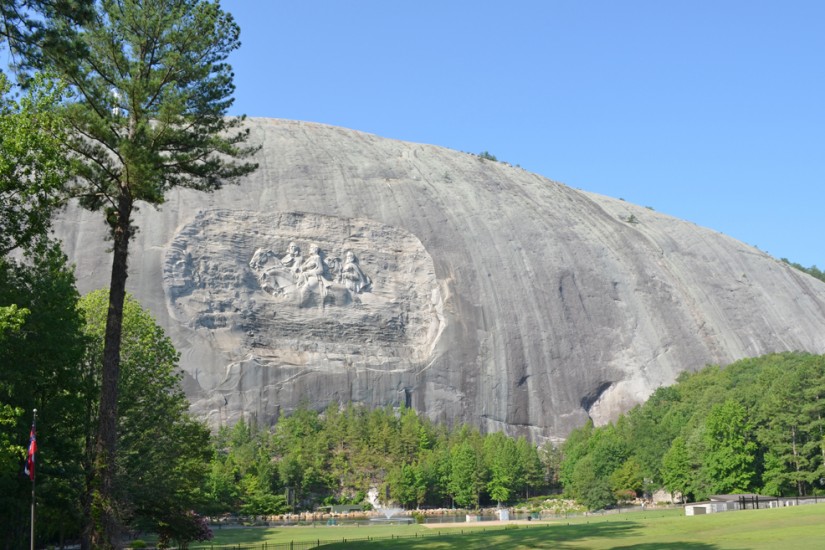 In 2018, Jackson and others plan on introducing a resolution in the Georgia state government that would establish a study of all the Confederate monuments in the state. The study will provide evaluations of the monuments based on when they were erected and with what intentions, and recommendations for how to move forward in removing or replacing them.

“When we start removing the symbols of hate and separatism and racism, that’s an important start to becoming one nation of one people,” Jackson says.

But the political process would be lengthy and likely controversial, considering 62 percent of people surveyed in a recent poll believe Confederate statues should remain standing, reports Clare Malone at FiveThirtyEight. And that’s not even taking the practicality of the project into consideration.

\\“The removal of the carving is not a trivial matter,” said Ben Bentkowski, president of the Atlanta Geological Society, by email. “You just can’t come in the night and remove it.”

Because the carving is 42 feet deep into the mountain, and hundreds of feet wide and tall, even controlled blasting could be dangerous for workers and bystanders. That said, the granite itself is solid, so sandblasting the sculpture wouldn’t affect the structural integrity of the mountain. And although he couldn’t provide a definite estimate for the cost of such an undertaking, Bentkowski believed it would “take millions of dollars to do it safely and not leave just a blast-scarred face of the mountain.”

Another solution goes in the opposite direction of destruction: why not add more to the sculpture? Figures proposed to balance history out have included Martin Luther King, Jr. and, more facetiously, Atlanta-based hip-hop duo Outkast. But this, too, would be a costly endeavor and is currently outlawed under the 2001 statute.

While Abrams and others have called for the sculpture’s removal, politicians on the opposite side of the issue have come to its defense. “Instead of dividing Georgians with inflammatory rhetoric for political gain, we should work together to add to our history, not take from it,” said Lt. Gov. Casey Cagle of Abrams’ position, reports the Atlanta Journal-Constitution.

There’s no easy answer when the monument in question is carved into a mountain, when Confederate generals continue to provoke strong emotions. What the debate boils down to is whose version of history will endure. And even when you have a 1,000-foot-granite wall at your disposal, it will never be enough space to capture the complexity of the nation’s centuries-long struggle with the legacy of slavery.