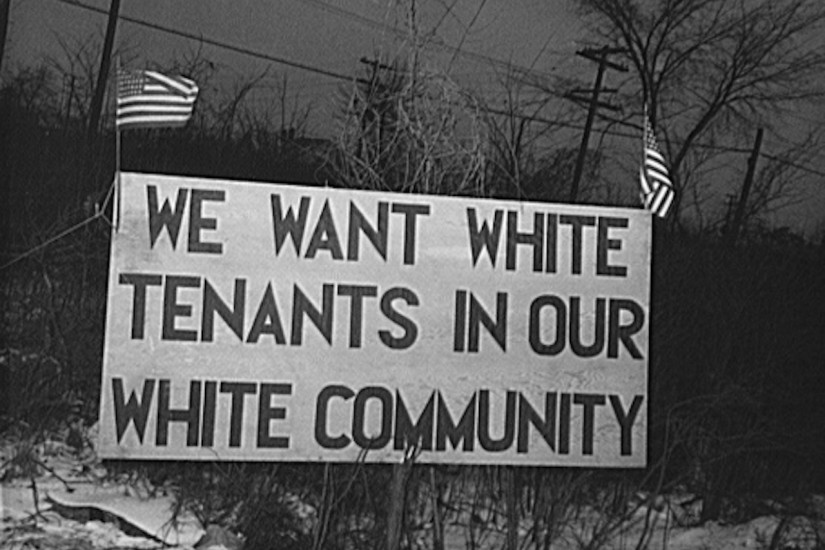 A sign erected across from the Sojourner Truth Housing Project in Detroit (1942).
Arthur S. Siegel/Library of Congress

But Rothstein doesn’t convincingly explain why the government remained committed to racial residential segregation for decades. If government was the tool by which segregation was created, who—or what—was the hand that wielded it?

Curiously, The Color of Law ignores the obvious answer: capitalism. The book’s focus on law and policy shifts attention away from surplus value and patterns of extraction and exploitation, instead of focusing on these dynamics as an integral part of America’s democratic, law-making system. We might well view residential segregation as the domestic expression of the racial capitalism of the 20th century.

Viewing residential segregation as a pivotal chapter in the global history of racial capitalism permits—indeed, demands—a critique of government policy and the state more generally. This perspective recasts the “private” as more than individual choice, belief, and action, allowing us to explore the racial character of the relationship between the state and private capital. It also forces us to attend to what that relationship meant to real estate agents, white homeowners, local law enforcement, black public housing tenants, and insurance company executives. With government as the vehicle, and capitalism in the driver seat, suddenly the racial segregation of the past century makes dreadful sense.

Rothstein claims that the role of government in residential segregation has been “forgotten.” If in the 1970s “the truth of de jure segregation was well known,” today, he laments, “we have suppressed our historical memory.” Although government complicity in producing racial segregation across the United States might be forgotten by some, a deep roster of urban historians has certainly told it.3 Hip-hop is littered with similar accounts that attribute inequality to the government. As Rakim declared in the 1992 song “What’s Going On?”:

My neighborhood don’t look so good

But the government is doing a project …

So I live in the projects.

Indeed, we might ask, of both Rakim and Rothstein, what is the ideological work achieved through pinning inequality solely on government?

In The Color of Law, “government” becomes a neat container, a broad catchall term. All told, Rothstein argues that up until 1975 or so, “racially explicit policies of federal, state, and local governments” were deliberately, systemically, and forcefully designed to segregate black from white. We learn that the Federal Housing Administration (FHA) was the national amplifier of previously local racial zoning ordinances and restrictive covenants. Through the nation’s public housing program, moreover, local and federal governments purposefully sought “to herd African Americans into urban ghettos.”

His argument rests on a contrast between private action and “government” action. In this narrow schema, anti-black racism articulated by white families and real estate agents, the purportedly objective language of risk used by bankers to deny African Americans mortgages, and the supposed ...