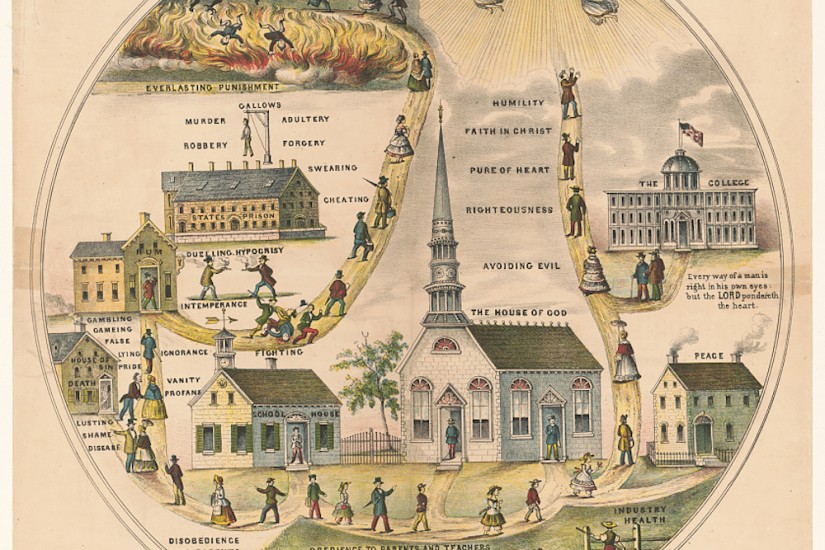 Imagery of Puritan ideology titled "The Way of Good and Evil." By John Hailer, c. 1862.
John Hailer/Library of Congress

If I told you that today’s America needs instruction from 17th-century Puritans, you’d probably think I was joking. We’ve heard enough about their depravity and their violence toward themselves, religious dissenters, and Native Americans to laugh off any suggestion that some of them may have been far ahead of us in facing hard realities that we prefer to finesse or ignore as our own society becomes more violent, addictive, deranged, and depraved than theirs ever was. The truth is complicated, as the intellectual historian Daniel T. Rodgers shows in his new book, As a City on a Hill: The Story of America’s Most Famous Lay Sermon. It may be even more complicated than Rodgers’s rendering of it.

In the winter of 1629–’30, John Winthrop — Puritan lawyer; owner of Groton Manor in Suffolk, England; and soon to be the first governor of the Massachusetts Bay Colony — was composing “A Model of Christian Charity,” a 6,200-word tract presenting the venture’s religious, political, and economic rules. His “Model” — which evangelical historian Michael Parker called “the most famous lay sermon in all of American history” — projected a “civil and ecclesiastical” regime binding its members to one another and to God in a covenant of Christian charity that would remain in force until 1684, when their charter was annulled.

Puritans lost their ecclesiastical, legal, and civic control not only to the monarch and to mercantilists but also to their own doctrine of “inscrutable grace,” which denied any connection between earthly success and salvation. Although the preeminence of their magistrates, ministers, and monied men carried godly obligations, it was no sign of how God would dispose of them or of the poor and lowly in heaven or hell. That contradiction prompted challenges to Puritan leaders from godly dissenters such as Roger Williams and Anne Hutchinson, and the consequences haven’t been limited to 17th-century New England. As Rodgers, pondering an insight of literary historian Sacvan Bercovitch, observes: “America could be John Winthrop’s nation and Anne Hutchinson’s nation because, in the dialectical heart of Winthrop’s model, the language of hegemony and the language of dissent were all but inseparable.”

In his new book, Rodgers follows that tension through American religious, civic, and political history, up through evangelical Christians’ embrace of Donald Trump. His survey of the Winthrop model’s ups and downs as an American “origin myth” shows that, although it was forgotten, derided, or invoked hypocritically to bless ill-gotten wealth in the booming, market-liberal republic that displaced it, it has resurfaced with a strange new vengeance since the mid-20th century, when prominent Americans have recast Winthrop’s text, wishfully or opportunistically, as one of the country’s semi-sacred founding documents.