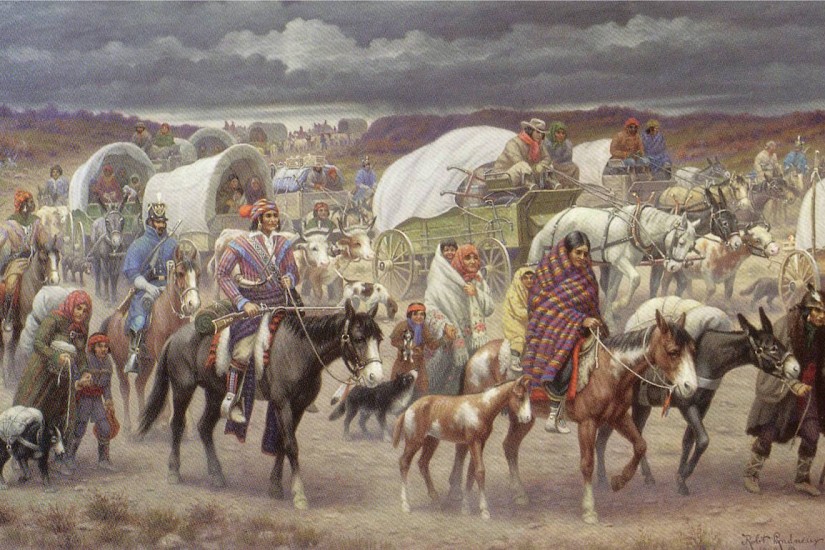 "The Trail of Tears," painted by Robert Lindneux in 1942.

June 16, 1838: Camp Hetzel. The Cherokees are nearly all prisoners. They have been dragged from their houses and camped at the forts and military posts all over the Nation. In Georgia, especially, the most unfeeling and insulting treatment has been experienced by them, in a general way. Multitudes were not allowed time to take anything with them but the clothes they had on. Well-furnished houses were left a prey to plunderers, who, like hungry wolves, follow the progress of the captors and in many cases accompany them. These wretches rifle the houses and strip the helpless, unoffending owners of all they have on earth. Females who have been habituated to comforts and comparative affluence are driven on foot before the bayonets of brutal men. Their feelings are mortified by the blasphemous vociferations of these heartless creatures.

It is a painful sight. The property of many has been taken and sold before their eyes for almost nothing; the sellers and buyers being in many cases combined to cheat the poor Indian. Private purchases, or at least the sham of purchases, have in many instances been made at the instant of arrest and consternation: the soldiers standing with guns and bayonets, impatient to go on with their work, could give but little time to transact business. The poor captive in a state of distressing agitation, his weeping wife almost frantic with terror, surrounded by one group of crying, terrified children, without a friend to speak one consoling word, is in a very unfavorable condition to make advantageous disposition of his property even were suitable and honest purchasers on the spot, but more especially so when the only purchasers present are harpies, not second in deeds of villainy to the wretches who plunder the shipwrecks of voyagers on the seacoast. The truth is the Cherokees are deprived of their liberty and stripped of their entire property in one blow. Many who a few days ago were in comfortable circumstances are now the victims of abject poverty. Many who have been allowed to return to their homes under passport to inquire after their property, have found their houses, cattle, hogs, ploughs, hoes, harness, tables, chairs, earthen ware, all gone. And this is not a description of extreme cases. It is altogether a faint and feeble representation of the work of barbarity which has been perpetrated on the unoffending, unarmed, and unresisting Cherokees.  I say nothing yet of several cold-blooded murders and other personal cruelties, for I would most conscientiously avoid making the slightest erroneous impression on any persons, being not in possession of precise and authentic information concerning all the facts in these cases of barbarity.

… It is due justice to say that at this station (and I learn the same is true of some others) the officer in command treats his prisoners with great respect and indulgence. But fault rests somewhere. They are prisoners and their families are prisoners without a crime to justify the fact. … The ...