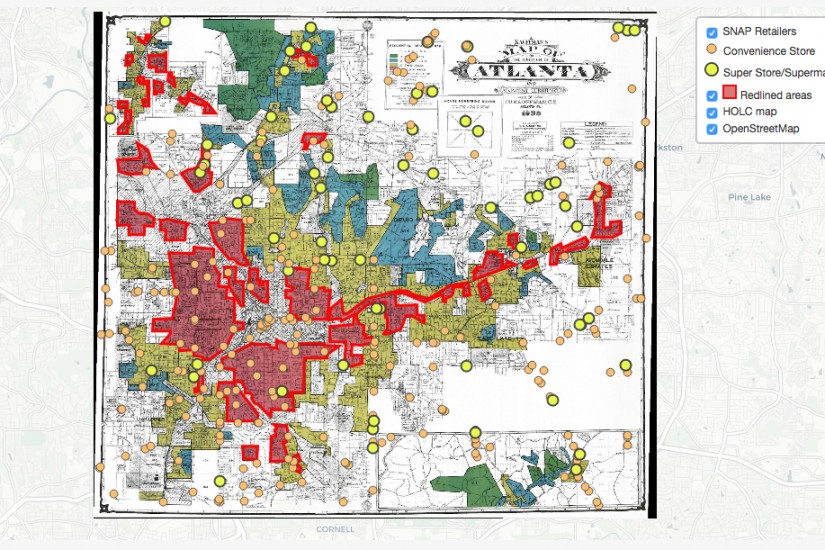 Rather than using the ecological metaphor of food deserts, some scholars have used the term supermarket redlining. Redlining refers to discriminatory practices in the housing industry dating to the 1930s. During this time, the Home Owners’ Loan Corporation (HOLC) created maps of many major urban centers that showed the lending risk in specific neighborhoods. Areas with an “A” grade were excellent candidates for home loans. At the other end of the scale, areas with a “D” grade – usually marked in red – were considered poor risks. “Redlined” areas were often determined based on a high rate of African American residents. In a previous post in Atlanta Studies, Jason Rhodes provided a fuller explanation of how HOLC maps impacted Atlanta specifically, and the University of Richmond also has an excellent resource for viewing HOLC maps in most major urban areas. These maps, and the logic that undergirded them, had a significant effect on mortgage lending throughout the twentieth century, and even to the present day. As a result, African Americans were systematically denied home mortgages during the largest housing boom in the nation’s history. Combined with other practices such as housing covenants, restrictive zoning, and urban renewal, redlining contributed to the flight of affluent, white homeowners to booming suburban communities.

Supermarket redlining as a term, then, resists framing disparities in access to healthy foods as just a side effect of an otherwise functional market or some “natural” urban ecology, as a bug in the system so to speak. Rather it highlights how the locational decisions of food retailers are evidence of intentional disinvestment in low-income neighborhoods and communities of color. This parallel is not simply metaphorical. Historically, supermarkets grew up along with the suburbs, relying on the sprawling, car dependent landscape of these low density communities. Supermarkets were created with suburban residents in mind, and so the forces that created the suburbs also shaped our food shopping options.


“Supermarket Redlining”
This legacy of the HOLC maps is clear if we compare the map for Atlanta, created in 1938, with the locations of food retailers in 2017.
…
View on Atlanta Studies
View Connections
Collection

How Decades of Housing Discrimination Hurts Fresno in the Pandemic

Decades of discrimination in Fresno laid the groundwork for a housing crisis today.
via Retro Report on January 15, 2021

How Air Pollution Across America Reflects Racist Policy From the 1930s

A study of more than 100 cities shows neighborhoods subjected to discriminatory housing policies nearly a century ago are hotter today than other areas.
by Meg Anderson via NPR on January 14, 2020

Maps of historic housing discrimination show how neighborhoods that suffered redlining in the 1930s face a far higher risk of flooding today.
by Kriston Capps, Christopher Cannon via Bloomberg on March 15, 2021

From Food Deserts to Supermarket Redlining

Connecting the dots between discriminatory housing policies in the 1930s and urban food insecurity today.
by Jerry Shannon via Atlanta Studies on August 14, 2018

COVID-19 and the Color Line

Due to racist policies, Black Americans are dying of COVID-19 at much higher rates than whites, and nowhere more so than in St. Louis.
by Colin Gordon, Walter Johnson, Jamala Rogers, Jason Q. Purnell via Boston Review on April 30, 2020