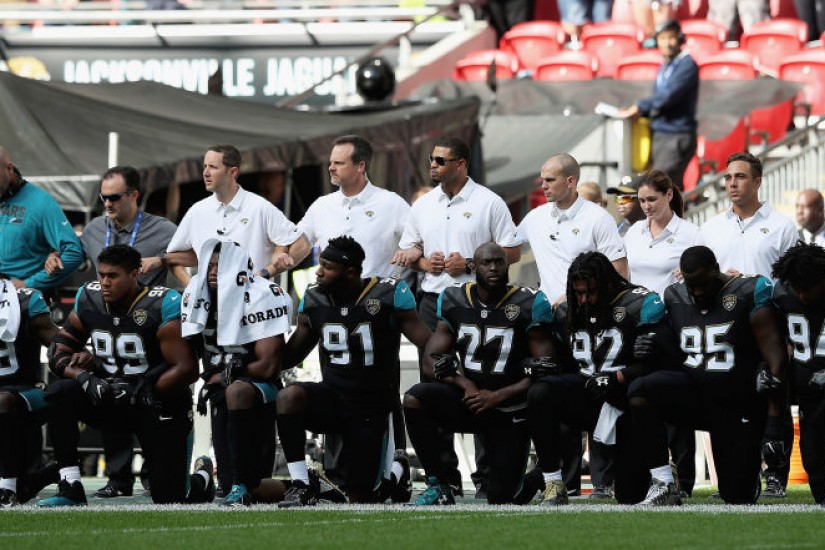 Jacksonville Jaguar players lock arms during the National Anthem prior to the start of a game at London's Wembley Stadium on September 24, 2017.
Matthew Lewis/Getty Images

Sixty years ago, Central High School in Little Rock, Arkansas, became a flashpoint in the nascent civil-rights movement when Governor Orval Faubus refused to abide by the Supreme Court decision in Brown v. Board of Education. Faubus famously deployed the state’s National Guard to prevent nine African-American students from attending classes at the high school. In the midst of the crisis, a high-school journalist interviewing Louis Armstrong about an upcoming tour asked the musician about his thoughts on the situation, prompting Armstrong to refer to the Arkansas governor as several varieties of “motherfucker.” (In the interest of finding a printable quote, his label for Faubus was changed to “ignorant plowboy.”) Armstrong, who was scheduled to perform in the Soviet Union as a cultural ambassador on behalf of the State Department, cancelled the tour—a display of dissent that earned him the scorn and contempt of legions of whites, shocked by the trumpeter’s apparent lack of patriotism. As the historian Penny Von Eschen notes in “Satchmo Blows Up the World,” a history of the American usage of black culture as a tool of the Cold War, students at the University of Arkansas accused Armstrong of “creating an issue where there was none,” and joined the procession of groups cancelling Armstrong’s scheduled concerts.

The free-range lunacy of Donald Trump’s speech on Friday night in Alabama, where he referred to Colin Kaepernick—and other N.F.L. players who silently protest police brutality—as a “son of a bitch,” and of the subsequent Twitter tantrums in which the President, like a truculent six-year-old, disinvited the Golden State Warriors from a White House visit, illustrates that the passage of six decades has not dimmed this dynamic confronted by Armstrong, or by any prominent black person tasked with the entertainment of millions of white ones. There again is the presence of outrage for events that should shock the conscience, and the reality of people who sincerely believe, or who have at least convincingly lied to themselves, that dissenters are creating an issue where there is none. Kaepernick began his silent, kneeling protest at the beginning of last season, not as an assault against the United States military or the flag but as a dissent against a system that has, with a great degree of consistency, failed to hold accountable police who kill unarmed citizens.