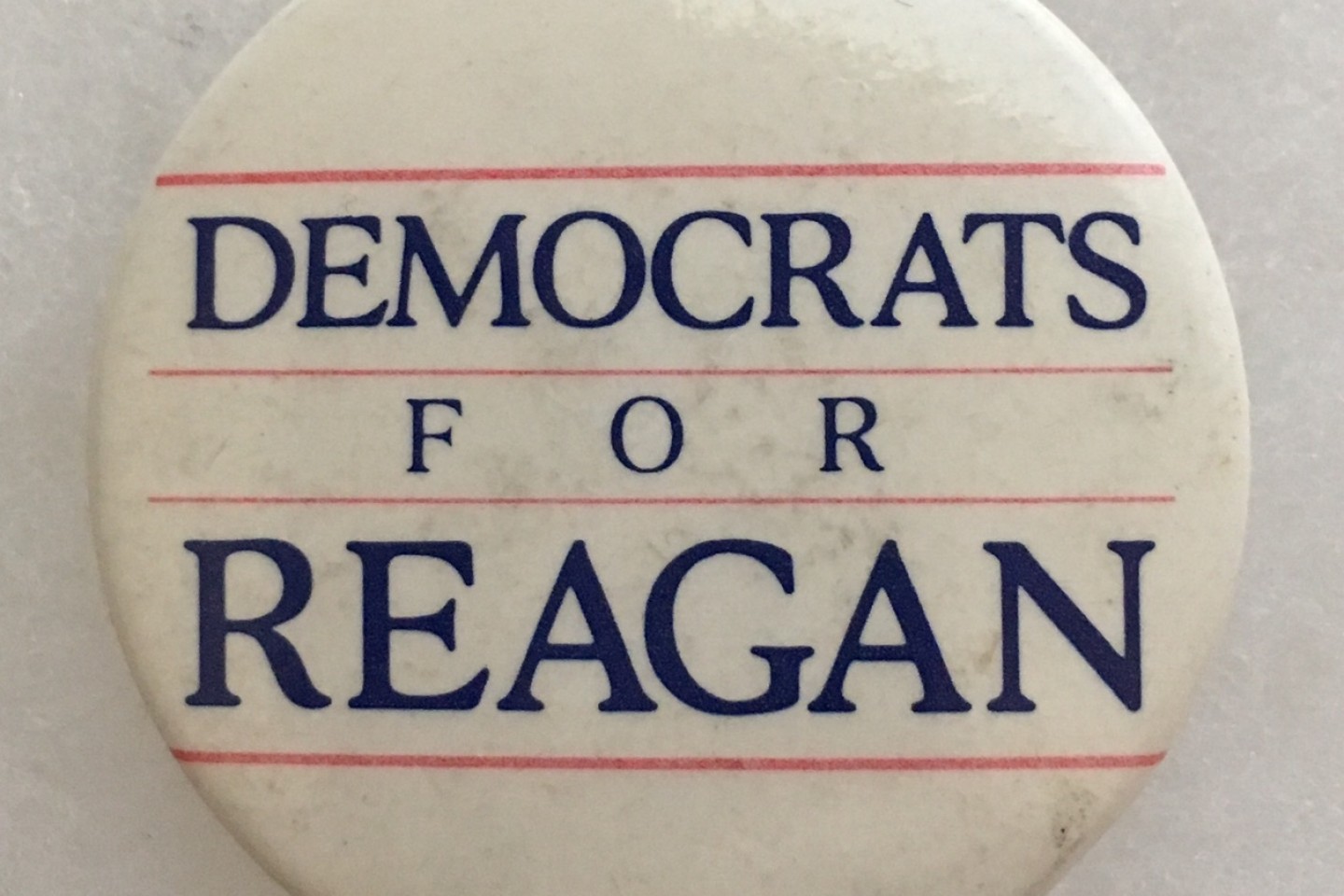 In the wake of the 2016 election, the media’s attention focused almost immediately on what had, only days earlier, been referred to as Hillary Clinton’s “firewall states.” Wisconsin, Michigan, and Pennsylvania had all turned red. Reporters were quickly dispatched to bars and diners across the Rustbelt to divine the mood of Trump voters over bacon, eggs and rounds of Budweisers. It didn’t take long before an old political trope was once again coloring their analyses – that of the so-called “Reagan Democrat.”

The construct dates back to 1980, when a cadre of longtime Democrats – mostly white union men, a majority without college degrees, and most situated within the relative comfort of older suburbs surrounding industrial cities – broke to the right and handed Reagan his commanding presidential victory. Ever since, “Reagan Democrats” have been treated as the essential electoral constituency – the sleeping dog at the center of American presidential politics.

Hillary Clinton has been widely criticized for neglecting this political phenomenon – attempting to campaign around the “Reagan Democrats,” and let the sleeping dog lie. Trump, meanwhile, is credited with updating Reagan’s political alchemy for a digital age. Reagan’s calls to “Drain the Swamp” of overbearing bureaucracy and regulation were echoed in Trump’s fulminations against Washington’s swamp of special interests; Reagan’s breezy confidence in simple solutions for thorny problems anticipated Trump’s sense that easy solutions were just a well-bargained deal away; and Reagan’s racialized and racist “Welfare Queen” trope morphed into Trump’s tirades on birtherism and “illegals.”

Considering the similarities between these two winning scripts, it can be tempting to attribute the success of Trump to the same white, working-class voting bloc that elected Reagan a generation earlier. Historian Bruce Schulman points out that this narrative predates the Gipper himself. “Nixon’s ‘Silent Majority,’ Scammon and Wattenberg’s ‘New Majority,’ ‘Reagan Democrats,’ Carville and Stephanopolous’s ‘It’s the Economy Stupid’ (and their attacks on Jesse Jackson and Sister Souljah), Bush’s ‘Compassionate Conservatism,’ and the archetypal ‘Trump voter’: these all constitute different names for what pundits classify as the same phenomenon.”

But Schulman is one of several political historians we spoke to for this article who worry about an overreliance on this analytical frame. The “construct is obviously problematic,” he says, “not least because the folks that threw Michigan to Trump in 2016 were largely not the same people who voted for Reagan.” Indeed, critical differences exist between the outlooks and experiences of these two sets of voters that remain woefully under-examined. Scholars and journalists became hyper-focused on the first generation of “Reagan Democrats” without exploring those voters’ underlying demographics, the deeper historical roots of their lurch to the right, or the paths they and their successors have followed since the 1980s. Despite the ubiquity of the concept, we know far less than we presume about the Reagan Democrats’ evolving political views; their relationship to groups like the Tea Party movement; or the demographic differences between them and the Rustbelt voters who elected Trump. Nevertheless, closer examination of the “Reagan Democrat” phenomenon reveals a good deal about American politics and media more broadly.

Here’s what we do know about the Reagan Democrats. The pollster Stanley B. Greenberg coined the term over four decades ago. Greenberg zeroed in on Macomb County, Michigan, a white working and middle-class suburb north of Detroit that flourished along with the region’s automobile economy. In 1960, 63 percent of Macomb County voters chose John F. Kennedy, making Macomb the most Democratic suburb in the country. Lyndon B. Johnson did even better, earning 74 percent in 1964. Richard M. Nixon lost Macomb in 1968 before winning it in 1972. But in 1980 Ronald Reagan decisively reversed the liberal tide, and did even better in 1984 when he won 67 percent of Macomb’s votes. A central theme that emerged from Greenberg’s interviews of Macomb residents was a sense of outrage among working and middle-class whites about “black privilege.” As one white Reagan voter reported, “We really don’t have much representation because Republicans are for big business, and the Democrats are for the giveaways, and we are the ones that pay all the taxes.”

This sense of racial grievance and white victimhood certainly has echoes today. But the term “Reagan Democrats” too often obviates careful parsing of voters’ motivations. As the public policy scholar Theodore Johnson, III, notes, the moniker “Reagan Democrats” offers a “useful euphemism to quell the anxiety” about describing “a group of familiar people in unflattering terms.” But the label risks overemphasizing “the impact Reagan’s economic and security platform had on this group while minimizing the role that race relations played in its electoral calculus.”

Indeed, the political outlooks of the voters who won Michigan for Reagan in 1980 and 1984 and for Trump in 2016 are different in important ways. While Reagan ran explicitly antigovernment campaigns and proposed dismantling programs like Medicaid and Medicare, Trump's economic message was often to the left of Hillary Clinton's. Reagan tied his racial demagoguery to undoing government programs. But, as Slate's Jamelle Bouie has pointed out, Trump yoked "his racial demagoguery to a liberal-sounding economic message, activating racial resentment while promising jobs, entitlements, and assistance." Voters in liberal "firewall states" who had prioritized economic policy over racial populism in recent elections – many of whom had voted for Barack Obama - now had a candidate who didn't force them to compromise. In states like Michigan, Wisconsin, and Pennsylvania, that sliver of the electorate made a big difference.

Which is to say that historical context matters greatly. Many of Reagan's white, working-class voters clung to private-sector union jobs, took for granted the broader, often invisible social safety net, and construed their tax burdens in zero-sum competition with public programs and services they believed disproportionately benefited minority voters. Fast-forward to 2016, and members of the white working class were still as likely to think in racialized zero-sum terms about public welfare programs. But they were also less likely to be members of unions than were black workers (thanks largely to the relative rise of public-sector unions) – meaning their employment may well have been more precarious. And their evolving views on visible programs like Medicaid and Obamacare suggested a deeper if grudging appreciation of the social safety net at a moment when secure working-class employment is more and more a thing of the past. In short, lumping working-class white voters of very different political and economic historical eras together under the same name risks flattening crucial differences in outlook and historical context.

But the widespread use of the Reagan Democrat trope among scholars and pundits limits our understanding of American politics in other ways. Though the phenomenon was real enough, the act of naming the concept offered squeamish pundits a useful abstraction that conflated a range of voters' motivations. Greenberg’s interviews made clear that racist grievances drove many Reagan Democrats. But when journalists deployed the “Reagan Democrat” trope, they deemphasized overt racism in favor of a more agreeable mish-mash of concerns about the government and the economy that sometimes flared up along “racial” (never “racist”) lines. Almost immediately, the “Reagan Democrat” trope offered the pundit class a convenient shorthand for deflecting more sustained consideration of the motivations of white working-class voters - an important segment of the media's viewers, readers, and listeners, it should be noted.

The Reagan Democrat phenomenon also obscured other crucial transformations in American politics, particularly changes within the Democratic Party itself. Lily Geismer, an historian of the “New Democrats” of the 1970s and 1980s says that fixating on the white working class led many to miss the centrality of “suburban liberals, the Atari Democrats and the New Democrats of the Democratic Leadership Council... in shaping the political landscape.” It was these Democrats, not working-class swing voters, that best exemplified “the strengths and limits of the Democratic Party” beginning in the 1980s and into the Clinton era and beyond.

While journalists often used the Reagan Democrats trope in ways that submerged the importance of race and racism, the opposite proved to be the case when the trope was deployed by the “New Democrats.” For many middle and upper class liberals, the trope provided useful political cover, enabling them to place their Party's electoral failures at the feet of white working-class voters: it was the Reagan Democrats' exceptional racism that blocked progressive policies. As they turned up their noses at the white working class, these liberals deflected their culpability in ongoing social crises. As historian Matthew Lassiter puts it, the “trope allows white liberals and intellectuals to de-emphasize the responsibility of many Democrats, upper middle-class types… in producing and sustaining racial and other forms of inequality.”

In fact, this hypocrisy on the part of white liberals who considered themselves socially progressive played an often-overlooked role in driving the Reagan Democrats to the Republicans. This tension was evident long before these Democrats voted for Reagan. Indeed, working-class whites and their allies (often in Catholic dioceses) were among the first to recognize upper middle class suburban liberals' hypocrisy when it came to race and the growing urban crises of the 1960s and 1970s -- an important break in the liberal coalition that would push many of these voters into Reagan's arms. In 1970, Cleveland, Ohio's Bishop William Cosgrove savaged the city's suburban liberal elite for decamping from the city, "parasitically" controlling the city's politics, and pitting white and black neighborhoods "against each other." As the Catholic syndicated columnist Andrew Greeley put it, "You," elite liberals "can have a [Black] Panther to supper and persuade yourself that you're not a racist. But those [working-class white] Poles, they certainly are."

In Cleveland, a working-class white “ethnic” named Ralph Perk sensed the unrest in his community and mounted an insurgent campaign to seize the city’s dormant Republican Party apparatus. He was elected Cleveland’s mayor in 1971, becoming the only Republican in charge of a large American city. Across the Rust Belt – from Philadelphia to Macomb County, Michigan – working-class whites pulled the lever for Richard Nixon in 1972. Nixon reciprocated by cultivating a political strategy that targeted blue-collar white voters, and sought to develop ties with mayors like Perk and Philadelphia’s conservative Democratic Mayor Frank Rizzo (who later became a Republican).

This tension between working-class whites and suburban liberals was perhaps best captured by the epithet “limousine liberals” (and its updated version, “latte liberals”). Mario Procaccino coined the famous phrase in his failed 1969 bid for the mayoralty of New York City. He charged liberals like Mayor John Lindsay (a liberal Republican who switched his party affiliation in 1971) with creating social programs to benefit the poor, foisting responsibility for their funding on whites like Procaccino, and then casting aspersions about white working-class racism as their limousines sped them home to lily-white suburbs. Long before Reagan claimed these Democrats, they had begun a move to the right spurred in equal measure by revulsion for liberal elites and support for the kind of law-and-order, low tax/high service politics offered by politicians like Perk, Nixon, and Rizzo.

Ultimately, as Theodore Johnson argues, “if we are to understand the convergence of conservatism, securitization, and white racial anxiety, we must understand the Reagan Democrats.” But, understanding the Reagan Democrats requires at once broadening our historical frame and being much more specific about demography and generational change. It requires a much more nuanced understanding of the evolving American working class. Indeed, pundits and scholars’ overwhelming attention on the white, male working class – the residue of the Reagan Democrat phenomenon – has subtly abetted a white, conservative identity politics that travels under the more acceptable flags of class grievance and populism. And so it is our hope that the concept of “identity politics” is the subject of further scholarly inquiry here at Bunk and elsewhere.