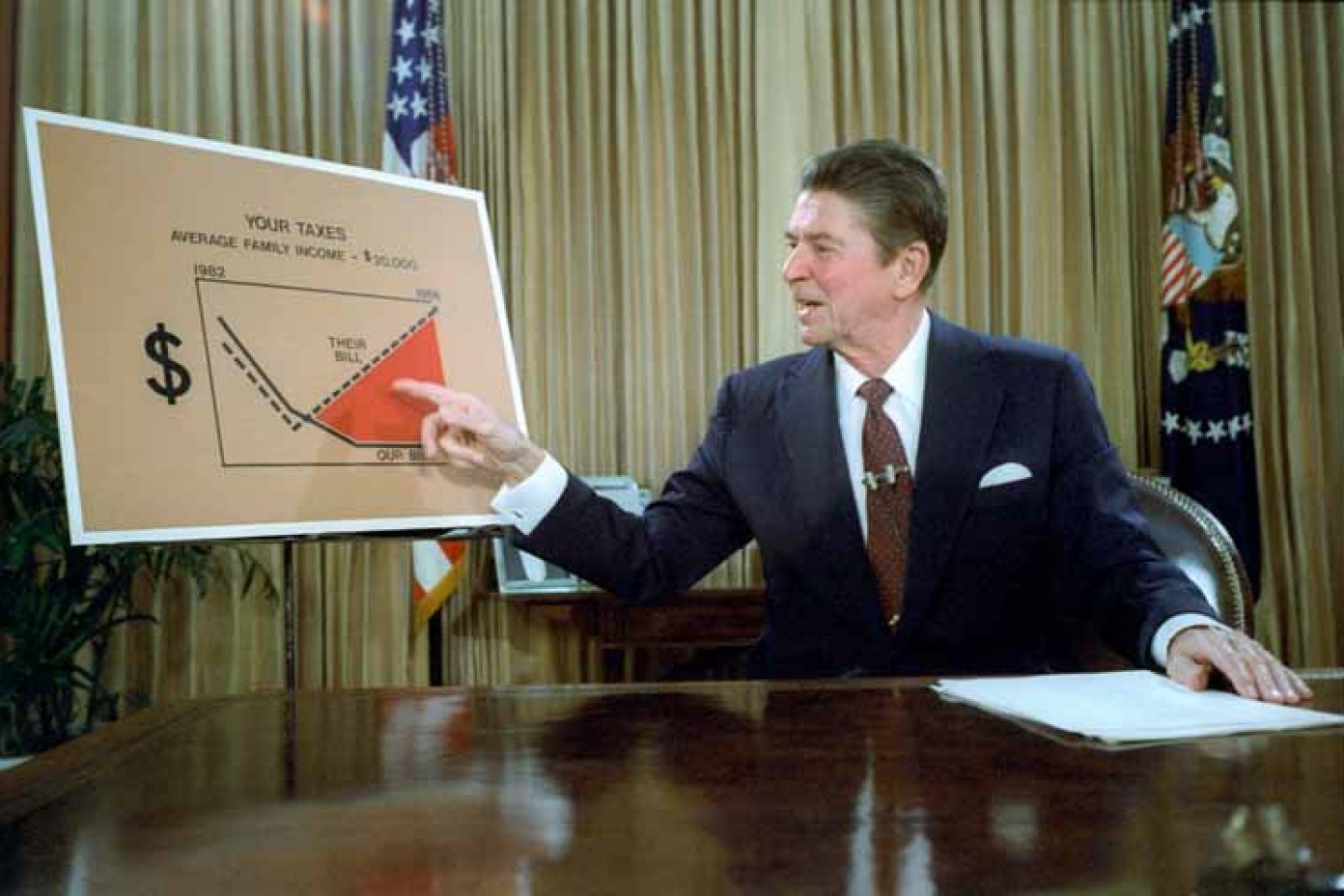 This is the second in a series of Bunk Originals offering historical perspective on key terms in American political discourse. You can read other installments in our Historical Field Guide to American Politics here.

As congressional Republicans attempt to pass their sweeping package of tax cuts before the end of the year, familiar battle lines have been drawn. Republicans pledge that the deficits created by the $1.5 trillion drop in tax revenues will be short-term. This yawning deficit, they maintain, will be more than made up by increased tax yields produced by the economic growth that will inevitably result from the cuts themselves. Democrats, meanwhile, howl that supply-side tax cuts have never paid for themselves and, instead, function mainly as handouts to businesses and the wealthy.

The problem with these four decades-old arguments about the economic or budgetary merits of supply-side tax cuts is that they almost entirely miss the point. For modern Republicans, the creation of massive budget deficits through tax cuts functions primarily as a political strategy disguised as the economic theory of “supply-side.” The fact that Democrats continue to engage the latter without recognizing the former ensures the strategy’s success.

What is that strategy? Over the preceding decades, Republicans have learned that cutting taxes and creating deficits creates a political climate favorable to their other agenda: rolling back the social safety net. Whether tax cuts stimulate growth is ultimately beside the point.

This is not to say that cutting taxes hasn’t ever stimulated economic growth. Ironically enough, the economic case for tax cut-based stimulus owes as much to liberals as it does to conservatives. In the early 1960s, John F. Kennedy’s economic advisors convinced the president to use a dramatic reduction of personal tax rates to stimulate the economy. With top marginal rates at 90 percent, in 1962 Kennedy explained to an audience at the Economic Club of New York that such high rates – established to prosecute World War II – had become “a drag on growth in peace time.” The heavy levy “siphons out of the private economy too large a share of personal and business purchasing power . . . [and] reduces incentives for personal effort, investment, and risk-taking.” By cutting taxes, his administration would “expand the incentives and opportunities for private expenditures.” Kennedy linked the benefits of his proposed cuts to traditional liberal concerns – the goal of “full employment” (he emphasized the point four times) and greater tax revenues. “It is a paradoxical truth,” he insisted, “that tax rates are too high today and tax revenues are too low and the soundest way to raise the revenues in the long run is to cut the rates now.” The foundational myth of supply-side theory was born.

The economic growth of the 1960s was due to a variety of factors, but by the 1980s, Republicans especially credited the Kennedy tax cut. Newt Gingrich extolled their virtues in especially effusive terms. The results were so very near perfect, Gingrich wrote, that it is “almost impossible to find anything wrong with the American economy” between 1962 and 1965 (at which point, he explained, Lyndon Johnson’s “so-called Great Society” began to derail things). “It seems eminently fair,” Gingrich charged, “that what we’ve tried since 1965 has failed, and what we tried in the years before 1965 worked magnificently.”1 (Gingrich, of course, overlooked the fact that Kennedy’s cuts went in to effect in 1964).

Nevertheless, Gingrich invoked Kennedy to sell Ronald Reagan’s tax cuts, which Congress passed in 1981. The Kemp-Roth Tax Cut package dropped the top marginal rate from 70 to 50 percent, slashed the estate tax, and included generous reductions for businesses. The cuts represented the culmination of nearly a decade of activism that, in conservative mythology, began at a Washington, D.C. restaurant when the economist Arthur Laffer drew a diagram on a cloth napkin. His Laffer Curve, as it came to be known, is supposed to have made supply-side believers out of Laffer’s dinner companions: Donald Rumsfeld, Dick Cheney, and the columnist Jude Wanniski.

If Gingrich joined Laffer’s dinner guests as a true believer, many other conservatives had their doubts. George H.W. Bush, of course, famously called supply side “voodoo economics.” Even the Wall Street Journal’s conservative editorial page worried about the new generation of Republicans who “have deemphasized . . . traditional fiscal conservatism in favor of a radical tax-cutting scheme.” Deficits were still the third rail for “traditional” conservatives like Bush and the Journal’s editors. For his part, President Reagan’s ideologically charged budget director David Stockman expressed “faith” that the supply side theory would be borne out. But he also conceded that when it came to the budget and future tax revenues, “None of us really understands what's going on with all these numbers."

What Stockman and conservative economists were confident about was that regardless of whether the tax cuts stimulated the economy (they didn’t), the short-term deficits they created would stimulate a political climate favorable for Republicans. They did.

As Stockman explained, the goal was primarily a “political question, not of budget policy or economic policy, but whether we change the habits of the political system.” Bruce Bartlett, a key strategist behind the Kemp-Roth tax bill, later elaborated that “a conservative government might intentionally increase the national debt through tax cuts in order to bind the hands of a subsequent liberal government.” Gingrich was characteristically blunter: conservative policies should be designed to create a “governing strategy” to “fund our friends, not [our] enemies.”2

In practice, this would essentially amount to Republicans creating massive deficits, and then cowing Democrats into accepting “fiscally responsible” cuts to social programs, to say nothing of creating new ones. Sure enough, in the 1980s, programs benefitting the poor suffered staggering cuts. The Reagan administration slashed $35.2 billion from the federal budget, 60 percent of which came from antipoverty programs. 400,000 Americans lost welfare benefits and another 279,000 saw them reduced. One million Americans lost access to food stamps. Given the support congressional Democrats gave to these cuts, supply-side was working, as Stockman predicted, to change the habits of the political system.

Fast forward to the George W. Bush administration’s tax cuts, signed into law in June 2001. The politics created by the ensuing massive deficits (and the explosion of debt required to fund the government in the war that followed) played a decisive role in limiting Democrats’ response to the financial crisis of 2008. The Obama stimulus plan that ultimately passed Congress was the anemic creature of a conservative political climate engineered by supply-side tax cuts.

It is tempting to simplify this strategy by invoking another conservative turn of phrase: “starve the beast.” But the long-term political impacts of these deficits run much deeper than do the short-term cuts to government programs. Political scientists call these downstream effects “policy feedbacks,” and, as Harvard’s Theda Skocpol has argued, conservatives are “simply light-years ahead of the left in thinking about the interplay of policy and politics” – that is, the ways in which policy choices can create a favorable political environment. As Skocpol predicted in January 2017, Republicans would move quickly to “get rid of the taxes on business and the wealthy that have paid for Obamacare’s remarkable expansion of health insurance.” “Ostensibly,” she continues,

full cessation of insurance benefits will be delayed to give the GOP time to devise “replacements” — the GOP is using the “replacement” language as a delaying and deflecting tactic. But as GOP strategists surely realize, there will be no future revenues to pay for adequate replacements, because conservative groups will go all out to support GOP politicians who promise not to raise taxes. Later, when Obamacare benefits are slated to fully disappear, conservatives will pit halfway restorations against funding for traditional Medicaid and Medicare, trying to force Democrats into choosing which kinds of health insurance to protect.

Today, while liberals in Congress, think-tanks, and the media are fighting an old battle over the merits of supply-side economics, they are almost entirely missing – and losing –  the real war, which Republicans have been winning since the 1980s. The historian Josh Mound recently described the results: “The predictable upshot” of liberals’ willingness to accept cuts to social programs “is that Democrats have spent the last forty years trimming their sails, inadvertently underwriting the GOP’s next tax cut.” Starving the beast during Republican administrations is one thing. Getting Democrats to join in has been the real coup.

Some Republicans have gotten so cocky about their supply side political strategy that they flirt with discarding their rhetorical concern about deficits altogether. As Mark Walker, Republican of North Carolina and chairman of the Republican Study Committee explained, deficits are a “great talking point when you have an administration that’s Democrat-led.” Today? “It’s a little different now that Republicans have both houses and the administration.”

The verdict is essentially in on supply-side tax cuts – they don’t pay for themselves, and the economic benefits they offer skew heavily toward the top of the income distribution. The deficits they create, meanwhile, consistently put “fiscally responsible” Democrats on the defense, forcing them to make difficult choices between valued social programs and in doing, dividing their base. At the same time, Republicans deliver gratuitous tax cuts for their own base.

Until liberals understand that supply-side tax cuts are a political strategy dressed as an economic theory, they will be doomed to repeat their technically accurate but utterly irrelevant arguments.