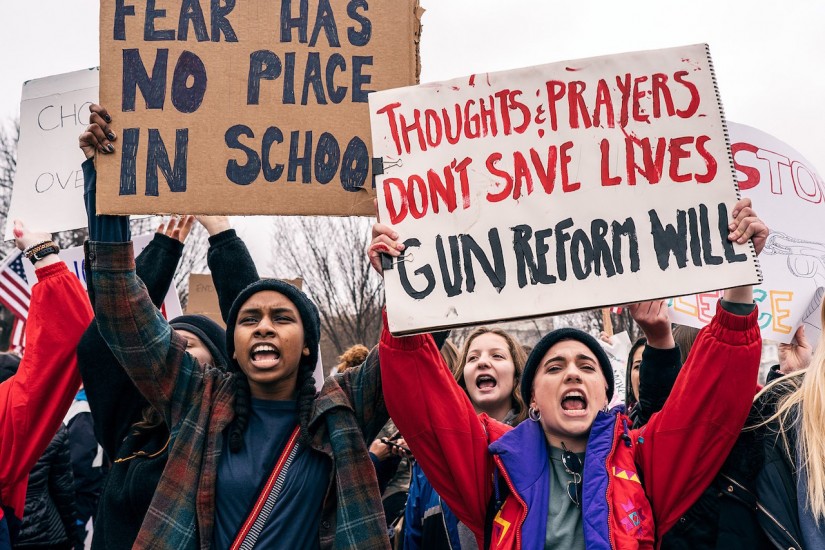 A demonstration in Washington DC on Feb 18, 2018, organized by Teens For Gun Reform in the wake of the Parkland school shooting.
Lorie Shaull/Wikimedia Commons
…

The precise circumstances behind each of these past walkouts was unique. But in each case, the participants tell TIME that the decision to walk out of their school buildings indicated that times were desperate. Walking out happened when other attempts to get attention failed.

In Farmville, the march — led by 16-year-old civil-rights pioneer Barbara Johns — was driven by abysmal learning conditions at the all-black school. At R.R. Moton High School, there were more than 450 students who had to fit on a high school campus originally built to accommodate 180. Three tar-paper shacks had been put up to accommodate the overflow. Parents had gone to the school board, and local leaders told them to be patient. Stokes says if the school district had built permanent buildings to accommodate the overflow instead of tar-paper shacks that “let the rain come in” then “I wouldn’t be talking to you now,” because the adults might have just kept waiting for change to come. Instead, with every other avenue exhausted, the students marched.

In Birmingham, young people protested as part of the city’s central place in the larger fight for integration. Their involvement was initially designed to minimize the economic impact of community members being sent to jail — after all, the students generally didn’t have families to support.

In Los Angeles, meanwhile, students had compiled a long list of grievances about the schools that served the Latino community, ranging from textbooks that didn’t cover their people’s history, to a curriculum centered on funneling kids into manual labor rather than college, to locked bathrooms that drove students to relieve themselves in the bushes. They attempted to go through the protocols for addressing those concerns, bringing the list to the school board and local officials. “They ignored us or patronized us, laughed at us, [asking] where were we going to get the money,” says Crisostomo. “They defined us as the next generation of cheap labor.”