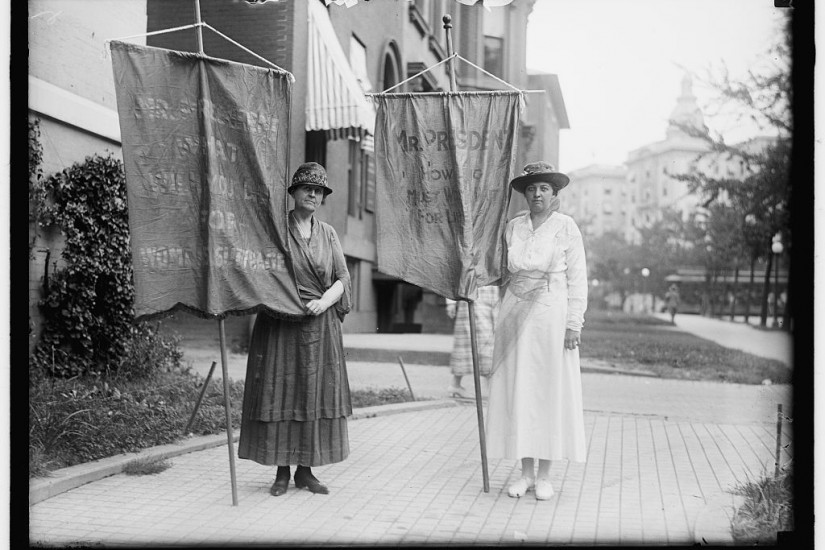 Two women attend a Washington DC protest in support of women's suffrage in 1918.
Harris and Ewing/Library of Congress

In 1912, New York City press fawned over the opening of a new restaurant at numbers 13 and 15 East 41st Street in Manhattan. On the inaugural day, 48 men and 652 women patronized the restaurant between the opening hours of noon and 2:30 p.m. Prices were shockingly low. For only 25 cents, customers could get a plate of roast lamb or beef accompanied by spinach and mashed potatoes; for 15 cents, lamb stew or codfish balls. “You can’t possibly spend more than 50 cents,” wrote The New York Tribune. “Unless, indeed, you want two pieces of pie.”

But this wasn’t your average budget restaurant. The men, sitting down for their meals in a private dining area upstairs, ate on china plates and with silverware stamped with a mission: “Votes for women.” Customers couldn’t turn their heads without encountering a new form of suffrage propaganda. Posters plastered the walls and even the bills were presented on trays with the mission inscribed into them. It was, the press exclaimed, “the very latest thing in the way of ‘votes for women.’”

The restaurant, called the Suffrage Cafeteria, was opened by socialite Alva Vanderbilt Belmont as part of her efforts to publicize and obtain more supporters for the suffrage movement. Though suffragists had hosted regular luncheons and teas as a form of fundraising and outreach, the cafeteria appears to be the first establishment in the United States dedicated to the cause. (In the United Kingdom, many restaurants, like the vegetarian-serving Gardenia, were frequented by suffragettes — a term embraced by the English, though it was used as a slur against American women fighting for suffrage.)

The Suffrage Cafeteria was one of as many as 11 street-front establishments Belmont opened in Manhattan, Brooklyn, the Bronx, and Long Island in the early 20th century. Other venues hosted meetings and entertainment, but the cafeteria was known for its delicious food and affordability — Belmont also sold provisions through the café, usually at a few cents below market prices. This, as a reporter for the San Francisco Chronicle wrote, “brought in men and women who might not otherwise be interested [in suffrage].” The tables reserved for men, as another newspaper noted, “were never empty.”