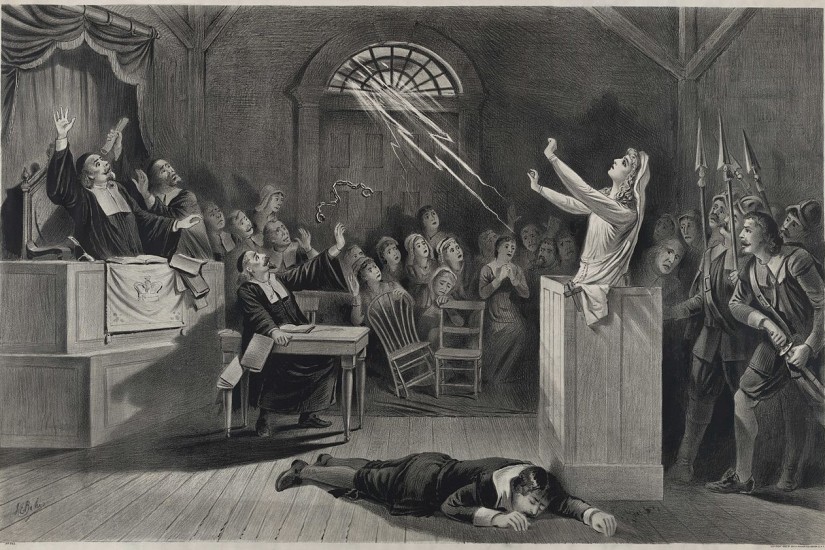 A lithograph depicting the famous Salem Witch Trials made in 1892.
Joseph E. Baker/Library of Congress
…

Because the Salem Witch Trials have drawn attention since shortly after they concluded (the earliest historical treatment came in Daniel Neal’s History of New-England, published in London in 1720), the facts have been overlaid for centuries with layers of myth, some nearly impenetrable. Myths are so much a part of the story that it is almost impossible to reveal the truth. Here I will address just a few.

First is the shorthand name of the event: the Salem witchcraft trials. True, the trials took place in Salem Town, but the crisis began in the outlying area then known as Salem Village (now Danvers). Further, the more than 150 accused people came from all over Essex County, a plurality of them from Andover. So, attentive readers of my book might ask why its subtitle is The Salem Witchcraft Crisis of 1692, rather than my preferred phrase, The Essex County Witchcraft Crisis of 1692. Answer: the tyranny of online search terms. I knew that if I used the more accurate subtitle, some readers (or purchasers) would never find the book.

Second is the story that the crisis began when some young girls became hysterical after practicing some sort of black magic with the African slave Tituba in the household of Samuel Parris, the Salem Village minister. Arthur Miller included a vivid such scene in his play. But there is no contemporary evidence to back up the tale. Tituba obviously interacted with the two children who lived in Parris’s home—the first to be afflicted—but there is no evidence that she associated with the later afflicted young people, most of whom were older teenagers. Nor is there an account of the accusers experimenting with magic together. Even Thomas Brattle, a contemporary critic of the trials who blamed the young accusers, did not suggest that their accusations arose either from Tituba’s influence or practicing witchcraft with one another.

Moreover, scholars now accept that Tituba was Native American, not African. She is always referred to as “Tituba [or some variant spelling] Indian” or “the Indian woman” in surviving records. So why has she been frequently presented as African, or possibly mestizo, including in Maryse Condé’s compelling 1992 novel I, Tituba? The identification of her as African goes back to the 19th century, when no one realized that early New Englanders frequently enslaved Indians as well as Africans.