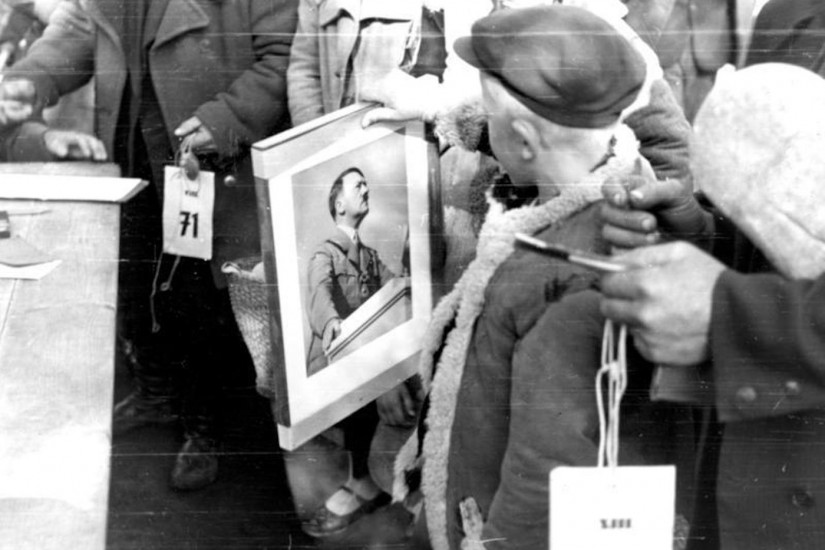 A Polish boy holds up a portrait of Adolf Hitler. (ca. 1940)
Bundesarchiv Bild/Wikimedia Commons
Adolf Hitler has been dead for more than 70 years, but he has gained immortality as a historical analogy. Simply glance at today’s news headlines: Major political figures from around the world, including Donald Trump, Vladimir Putin, and Recep Tayyip Erdogan, are routinely compared to the Nazi leader. Some scholars and journalists claim that Hitler analogies have great contemporary relevance for making sense of the global surge of right-wing nationalism, authoritarian populism, and neofascism. Others dismiss such comparisons as exaggerated hyperbole. Both sides have legitimate points. Yet, since the political climate is in flux, it may be some time before we can determine whether the comparisons are appropriate or alarmist. In the meantime, we can better understand the argument by examining an earlier but strikingly similar craze for historical analogies from the Nazi era. While commentators today debate whether Hitler analogies explain modern politics, observers back then tried out various analogies to explain Hitler.

In the decade and a half between the Nazis’ rise to power in the early 1930s and the collapse of the Third Reich in 1945, Anglo-American journalists singled out a murderer’s row of notorious revolutionaries, religious fanatics, dictators, conquerors, and warlords who they believed could illuminate the Nazi threat.

Regardless of which historical figures were invoked, the analogies served several didactic goals. The commentators sought to make Hitler comprehensible by comparing him to familiar examples; they aimed to reassure people psychologically that the events they were experiencing were merely new versions of older ones; and they showed how past precedents could provide guidelines for present-day action. As often as not, the analogies did more to conceal than reveal Hitler’s radicalism. Following Hitler’s appointment as chancellor on January 30, 1933, journalists expressed a mix of caution and confidence by invoking the figure of Emperor Napoleon III.
…
View on The Atlantic
View Connections