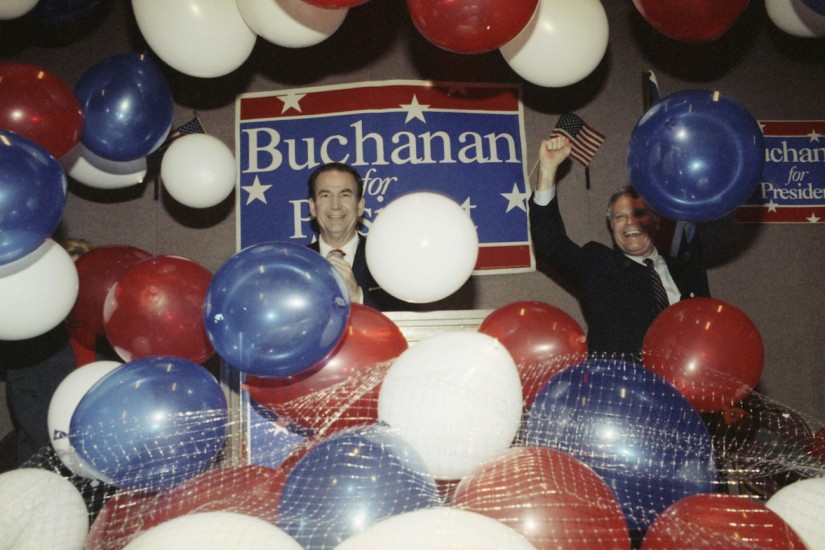 The night of the New Hampshire primary, February 18, exit polls showed Buchanan and Bush neck and neck. By the time Buchanan took the stage after 10 p.m. it looked like he still had around 40 percent of the vote. “Tonight what began as a little rebellion has emerged into a full-fledged middle-American revolution,” he told the crowd. “We are going to take our party back from those who have walked away and forgotten about us.” (When the night was over, he had 37 percent of the vote; Donald Trump got 35 percent when he won that primary in 2016.)

For reasons of temperament and policy alike, Buchanan polled miserably among women voters; fortunately for him, more than half of the people who showed up to vote in New Hampshire were men. Buchanan’s early lead was driven by unemployed guys going to the polls because they didn’t have anything else to do. Buchanan played up his bully-boy image, making a number of roguish asides to reporters who asked about his penchant for fighting in his youth. To the wounded heirs of American masculinity in New Hampshire, Buchanan had an undeniable appeal. Even if these forgotten men realized at some level that the textile mills weren’t coming back, Buchanan gave their despair shape and direction.

In the February issue of Chronicles, Sam Francis had an essay entitled “The Education of David Duke.” Francis mused that “it’s possible that future historians will look back on the Louisiana gubernatorial election of 1991 as a turning point in American history.” He freely conceded that liberals were “dead right” about their belief that “David Duke represents the logical culmination of the conservative resurgence of Ronald Reagan,” and then went on to identify what he thought was the true essence of the Reagan revolution:


Reagan conservatism, in its innermost meaning, had little to do with supply-side economics and spreading democracy. It had to do with the awakening of a people who face political, cultural, and economic dispossession, who are slowly beginning to glimpse the fact of dispossession and what [it] will mean for them and their descendants, and who also are starting to think about reversing the processes and powers responsible for [it].

In the states of the Confederacy, Buchanan leaned heavily into the oldest romantic myth of white dispossession. In Georgia, with cameras in tow, he gazed up admiringly at Stone Mountain, the massive bas-relief monument to Robert E. Lee, Stonewall Jackson, and Jefferson Davis. He told supporters there that the Voting Rights Act was “an act of regional discrimination against the South.” In the midst of a dramatic downpour, he stopped to lay flowers at the grave of his great-grandfather William Martin Buchanan, a Confederate soldier who he claimed owned a plantation. He vowed to avenge his ancestor’s capture by Sherman by winning in Georgia.

Courting fringe constituencies presented very little downside. An AP reporter overheard Buchanan’s New Jersey volunteer coordinator, Joe D’Alessio, compare interracial marriage to the cross-breeding of animals. D’Alessio was forced to resign, but no one at the time reported that D’Alessio was also the state chairman of Willis Carto’s racist Populist Party. Nor did the media catch that Boyd Cathey, Buchanan’s North Carolina chairman, a member of the ultra- traditionalist Society of Saint Pius X was senior editor at Southern Partisan and on the board of the editorial advisory committee of The Journal of Historical Review, a publication of the Carto-founded Institute for Historical Review, the center of organized Holocaust denial in the United States.

Even though Georgia’s economy was in much better shape than New Hampshire’s, Buchanan nearly repeated his showing, getting just shy of 36 percent of the vote. (Trump got just shy of 39 percent when he won the Georgia primary in 2016.) But on Super Tuesday a week later, the Buchanan primary bubble burst. The attacks were getting more serious, too. Neoconservative columnist Charles Krauthammer in the Washington Post stopped beating around the bush and flat-out called Buchanan a fascist.