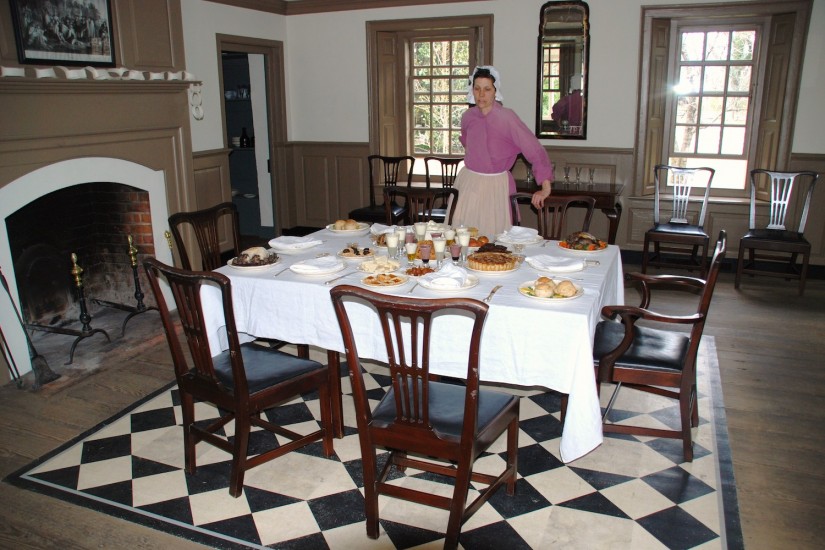 A Colonial Williamsburg historical interpreter and a table of colonial-era dishes (2008).
Wikimedia Commons

Just a few blocks past a college bookstore, modern restaurants with beer flights and big-screen TVs, and gift shops selling the same trinkets you'd find in any tourist town in America, you might wander onto a cobblestone street.

A rooster crows. The smell and sound of horses drifts in the breeze. Women go about their business dressed in caps and petticoats; men wear breeches, perhaps a cravat.

Colonial Williamsburg, Va., the 300-acre living-history museum, is a place where people stumble into the past, whether it's talking to the bookbinder stitching pages by hand or the people growing long-forgotten fruits and vegetables.

Since restoration began in 1926, the dream of preserving this section of Williamsburg has come to include the chance to taste history.

There is a foodways program, through which people in colonial garb cook year-round over an open fire using culinary technology only available in the 18th century.

And then there are farmers like Ed Schultz, who sows fields with turnips, tobacco, corn and cotton using literal horse-power; or Eve Otmar, a journeyman gardener who tends to the "gentleman's garden," which includes flowers in the summer and expensive glass frames that allow lettuces to be grown all year.

"We have prickly pear in our garden," Otmar says. "People are horrified, surprised and stunned." She tells the story of how a woman who had lived in Virginia for 52 years once told her she had never seen a prickly pear. "They're native here," Otmar says.

While guests can often buy seeds to take home or sample some of the edible produce if they're lucky, the relationship between the foods of past and present get a little murkier in Colonial Williamsburg's many restaurants.

Guests might think they want a taste of the past, but their thoroughly modern palates often disagree.

"When you look at re-creating historic recipes, sometimes it doesn't taste that good," says Travis Brust, head chef of the Colonial Williamsburg Inn. "A lot of things seem to be overcooked. It doesn't have the seasoning profile you'd expect." Making the past come alive — foodwise — is often a matter of trial and error. A ginger cake the colonial restaurants serve around the holidays took at least 10 attempts before they got the sugar and spices to a level that seemed palatable.