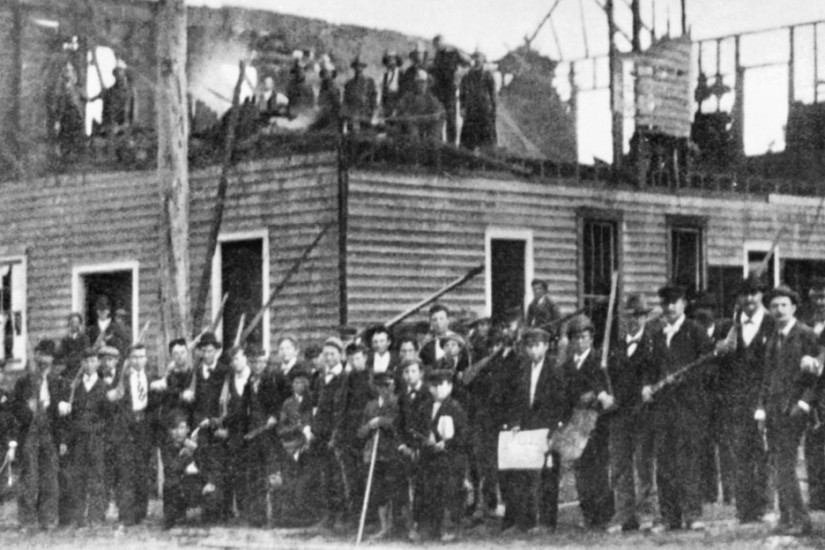 Armed rioters in front of the burned-down "Record" press building on Nov. 26, 1898, following the Wilmington, N.C. race riot.
Library of Congress
…
PART ONE
THE APOLOGISTS
In January, the Orlando Sentinel posted an impassioned apology for inflaming racial tensions decades ago in a 1949 case called “The Groveland Four.” Four young African American men were accused of raping a white woman, charges that resulted in the extra-judicial killings of two of them and the lengthy imprisonment of two others.

The occasion for the editorial was the anticipated official pardon by the State of Florida’s Clemency Board, chaired by newly elected Gov. Ron DeSantis, who characterized the case as a “miscarriage of justice.” This followed a vote two years ago by the Florida legislature for a “heartfelt apology” to the families of the four men.

In recent years, a handful of the region’s newspapers have stepped forward to accept responsibility for biased reporting and editorials, shouldering their share of the burden of racist Southern history. They are acknowledging — belatedly — what their forebearers did and did not do in covering racism, white supremacy, terror and segregation over the past 150 years. Some newspapers, including the Sentinel, had especially grievous sins to confess.

The Orlando Sentinel: 'We're sorry'
Noting the State of Florida’s apologies for what was unfairly inflicted on the Groveland Four, the Sentinel wrote in an updated version of the editorial that appeared on the front page of the Sunday, Jan. 6, print edition:

“We’re sorry for the Orlando Sentinel’s role in this injustice. We’re sorry that the newspaper at the time did between little and nothing to seek the truth. We’re sorry that our coverage of the event and its aftermath lent credibility to the cover-up and the official, racist narrative.

“We’re sorry that reporters and editors failed in our duty to readers, to the community and to the Groveland Four and their families.”

The case was the subject of Gilbert King’s 2013 Pulitzer Prize-winning book, “Devil in the Grove: Thurgood Marshall, the Groveland Boys, and the Dawn of a New America,” which set in motion the state’s reexamination of the case. After recounting the details of the case and coverage, the editorial continued:

“The story had many more ugly twists and turns marked by lies, cover-ups and injustice.

“You wouldn’t know it from reading the Orlando Morning Sentinel in the years immediately following the incident.

“Instead, the paper inflamed the public several days later, publishing on the front page a cartoon that showed four empty electric chairs and labeled ‘The Lake County Tragedy’ and ‘The Supreme Penalty.’ Above the cartoon, a title read, ‘No Compromise!’ The cartoon ran just as a grand jury was convening. It quickly returned murder indictments against the men.”