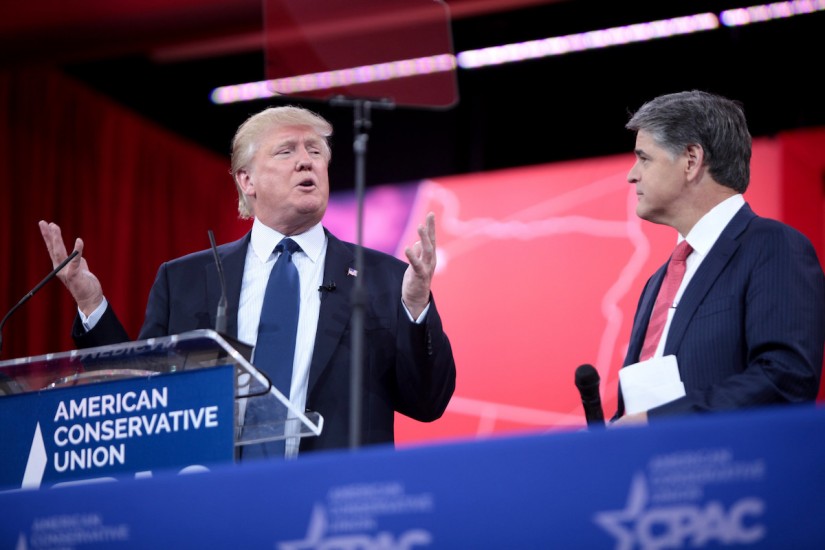 From the travel ban to the Kavanaugh confirmation fight to the Mueller report, Fox News and Republican leaders quickly honed in on the same talking points, then stood shoulder to shoulder against any outside criticism.

So will it be enough to save him from impeachment and removal?

There have not yet been any defections within the GOP, and Fox News continues to slavishly support the president, as do the vast majority of Republicans.

But the impeachment drive has altered the way that Fox and Trump function in the broader media and political environment. The defenses of Trump popping up on shows like Hannity and Fox & Friends are thin conspiracy theories (like one that suggested the intelligence community inspector general had changed the whistleblower form to allow secondhand information) that dissolve upon inspection.

That’s fine for Fox’s audience — they’re there for affirmation and talking points — but so far it hasn’t had much of an impact on the broader story of Trump coercing Ukraine to interfere in the 2020 election. It’s even causing odd flare-ups on Fox News itself, as the more news-oriented anchors quietly debunk the conspiracies that the more propagandistic opiners hype. This led to a spat between Shepard Smith and Tucker Carlson that ended with the network ordering Smith, who was pushing back against Carlson’s spin, to drop it.

But an underplayed dimension of this is that Fox has actually played a role in endangering the future of the Trump White House. The feedback loop between Fox News and the White House has often been covered as an asset: Trump is the first American president to have something approaching state television, a channel that will lavish praise on him while amplifying any spin the administration offers.

But over the past decade, Fox News has become increasingly committed to fringe ideas and conspiracy theories, especially in its opinion programming. This was, after all, the network that boasted Glenn Beck’s elaborate chalkboards, Sean Hannity’s fever-brained conspiracies about Seth Rich, a murdered DNC staffer, and yes, Donald Trump’s birther scam.

When Trump won the presidency, the consequences of Fox News’s conspiracy turn escalated. Trump would rail against the deep state, Hannity would spend fifteen minutes covering it on his show, Trump would watch Hannity and grow even more convinced there was a deep-state conspiracy. Both the network and the White House were becoming untethered.