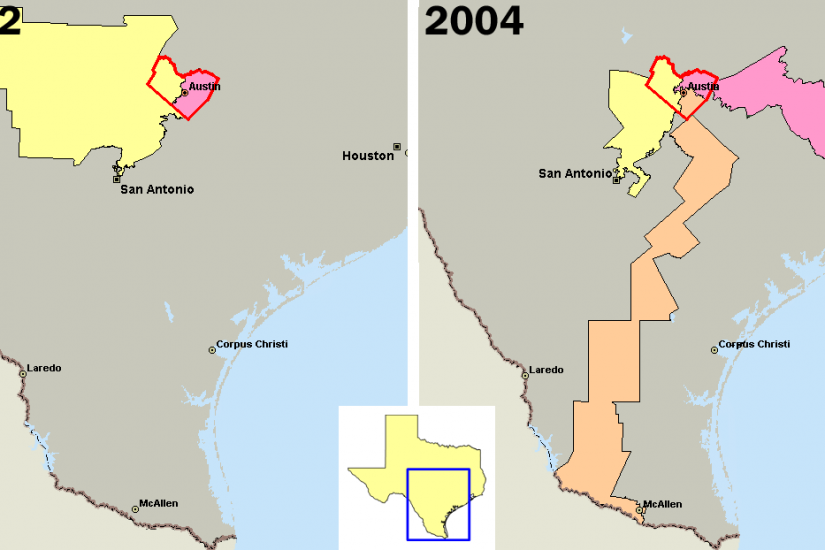 Congressional districts in Travis County, Texas before and after a 2003 redistricting.
PHenry/Wikimedia Commons

The U.S. Supreme Court announced on Monday that it will rule later this year on the matter of partisan gerrymandering, in what's considered to be the most significant case on the subject in years. At issue is whether Republican leaders in Wisconsin violated residents' constitutional rights by carving up electoral districts so that likely voting results would ensure party control.

To understand how partisan redistricting came to be known as "gerrymandering," one has to look back more than 200 years ago to an 1812 political cartoon, often credited to Elkanah Tisdale, which appeared in a pro-Federalist newspaper, the Boston Gazette. It satirizes a law signed by Massachusetts Governor Elbridge Gerry in February 1812, which reorganized state senatorial voting districts in a way designed to secure his own position and a majority in the legislature for his party — Thomas Jefferson's Democratic-Republicans — while keeping the Federalists (the party of John Adams and Alexander Hamilton) out of power. The new districts were oddly shaped, but they had the effect of grouping or splitting voters in such a way that the results would be predictably favorable for one party or the other. The effort worked; in the election after the redistricting, the Democratic-Republicans won 29 seats and the Federalists won 11.