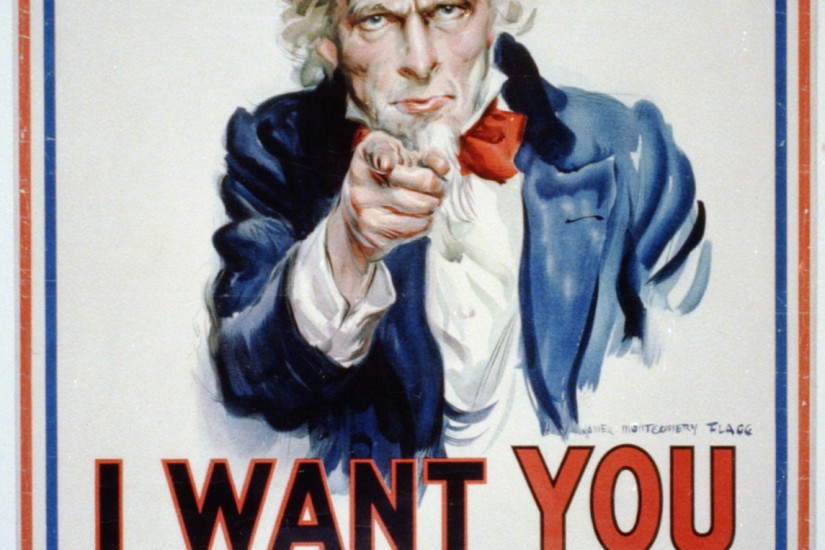 A World War I propaganda poster (circa 1917).
James Montgomery Flagg/Library of Congress

When the United States declared war on Germany 100 years ago, the impact on the news business was swift and dramatic.

In its crusade to “make the world safe for democracy,” the Wilson administration took immediate steps at home to curtail one of the pillars of democracy – press freedom – by implementing a plan to control, manipulate and censor all news coverage, on a scale never seen in U.S. history.

Following the lead of the Germans and British, Wilson elevated propaganda and censorship to strategic elements of all-out war. Even before the U.S. entered the war, Wilson had expressed the expectation that his fellow Americans would show what he considered “loyalty.”

Immediately upon entering the war, the Wilson administration brought the most modern management techniques to bear in the area of government-press relations. Wilson started one of the earliest uses of government propaganda. He waged a campaign of intimidation and outright suppression against those ethnic and socialist papers that continued to oppose the war. Taken together, these wartime measures added up to an unprecedented assault on press freedom.

I study the history of American journalism, but before I started researching this episode, I had thought that the government’s efforts to control the press began with President Roosevelt during WWII. What I discovered is that Wilson was the pioneer of a system that persists to this day.

All Americans have a stake in getting the truth in wartime. A warning from the WWI era, widely attributed to Sen. Hiram Johnson, puts the issue starkly: “The first casualty when war comes is truth.”

Within a week of Congress declaring war, on April 13, 1917, Wilson issued an executive order creating a new federal agency that would put the government in the business of actively shaping press coverage.

That agency was the Committee on Public Information, which would take on the task of explaining to millions of young men being drafted into military service – and to the millions of other Americans who had so recently supported neutrality – why they should now support war.

The new agency – which journalist Stephen Ponder called “the nation’s first ministry of information” – was usually referred to as the Creel Committee for its chairman, George Creel, who had been a journalist before the war.