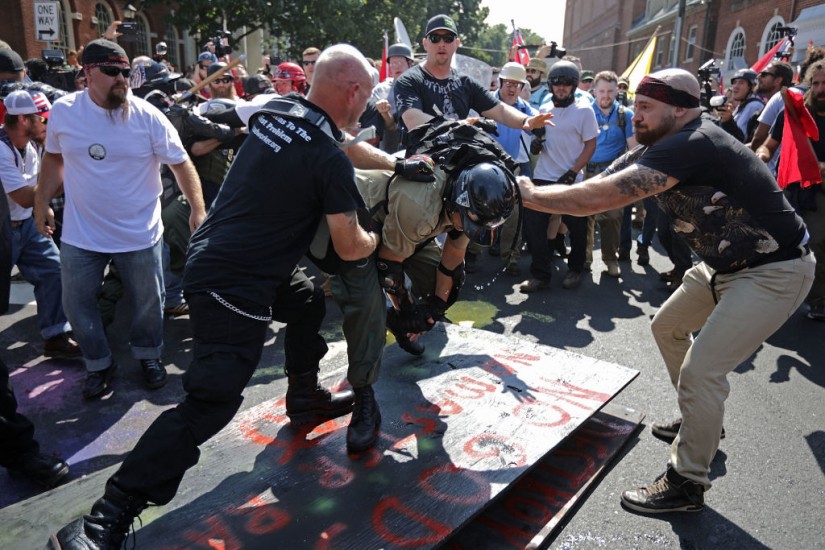 Fifty-one years ago this month, George Lincoln Rockwell, the founder of the American Nazi Party, addressed a crowd of three thousand sympathizers in Marquette Park, in Chicago. The rally came in the midst of Martin Luther King, Jr.,’s fraught Northern campaign, in which he sought to point out the ways in which segregation and discrimination were not exclusively the habits of white Southerners. The Nazis seized the opportunity to present themselves as defenders of white communities, preventing the onslaught of violence against whites that integration would surely bring. Writing about the A.N.P.’s activities ahead of the rally, the Times observed, “What confused many who still remember the swastika as the symbol of the concentration camp was the reception they got.” Local whites endorsed Rockwell’s anti-black, anti-Semitic rhetoric in striking numbers. The scene recalled a moment nearly three decades earlier, when Fritz Kuhn, the leader of the Nazi-sympathizing German American Bund, drew twenty thousand people to Madison Square Garden, to hear him present his brief in defense of Adolf Hitler. Kuhn’s 1939 rally proved to be the pinnacle of a fleeting movement, as did Rockwell’s Marquette Park gathering. The point here is that this weekend in Charlottesville was not the first time this country has witnessed the mass mobilization of Nazis. But it is the first time we’ve seen such a feeble response to those gatherings in the upper echelons of American power.

The current occupant of the White House has never distinguished himself for his moral instincts, but those deficits have seldom been more apparent than in the nadir reached in Charlottesville on Saturday. Having failed to address the terrorist attack upon a Minnesota mosque last week, Trump offered blandishments regarding the rising tide of racial contempt that inspired the violence in Charlottesville. When he did speak about the crisis, he denounced bigotry and violence “on many sides,” in a statement that was bizarrely punctuated by references to efforts to reform trade relationships and better conditions for veterans. We have seen a great number of false equivalencies in the past two years, and the most recent Presidential election was defined by them. Yet it remains striking to hear Trump imply that Nazis and the interracial group of demonstrators who gathered to oppose them were, in essence, equally wrong.

It would have been naïve to expect the President to unambiguously condemn neo-Confederates (“Heritage, not hate,” etc.), but Nazis?