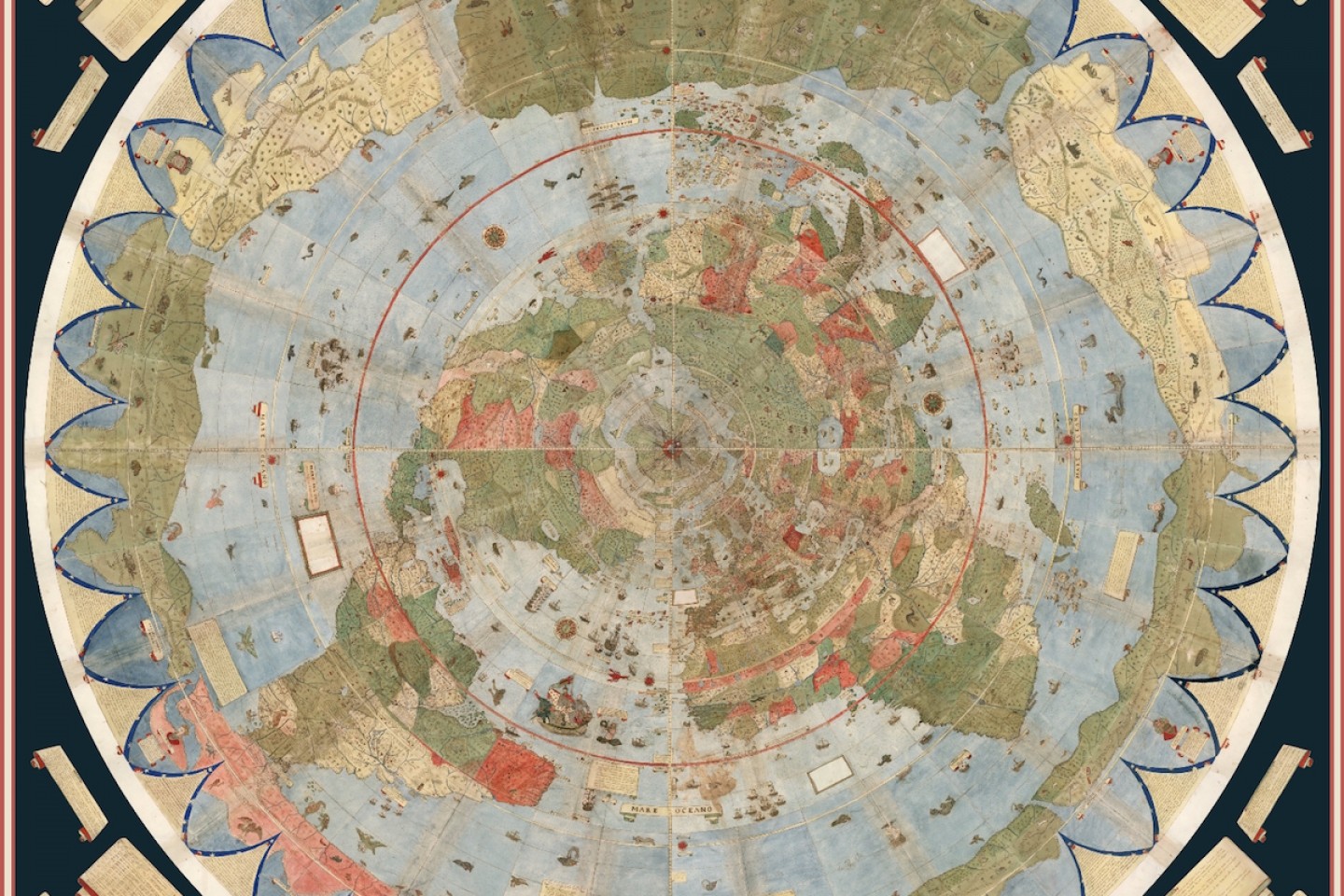 When and where does “American history” begin? The answers to that question once began with names like Sir Walter Raleigh, Jamestown, and Plymouth Rock. More recently, those answers have changed. Now, when historians narrate the beginnings of American history, they mention places that predate British colonization altogether—places like New Mexico, or cities like San Juan, Puerto Rico (1521) and St. Augustine, Florida (1565). Going deeper in time, they could point to pre-Columbian urban centers such as the settlement of Cahokia in the Mississippi Valley. The history of the United States has many points of origin, distributed widely through time and space.

But those origins can be difficult to visualize. Rough maps of what would become the United States had been created by European cartographers since at least the 1520s, but they remained largely inaccessible: at the time of their creation, they held closely guarded secrets relating to maritime anchorages, navigational routes, and other valuable proprietary information. And even as they aged into antiques, many of these maps remained locked up in far-flung archives and private collections.

That changed, in part, with the David Rumsey Map Collection’s 2017 digitization of a beautiful and astonishingly detailed map from the 16th century. Created in Milan by an Italian cartographer named Urbano Monte, the document consists of 64 separate sheets that, when assembled, constitute the largest-known early modern world map, at 10 feet square.

Monte seems to have had an extraordinarily good array of cartographic informants. His map covered everything from the names of towns in Japan to warnings about “spirits that deceive” roaming the deserts of Afghanistan—as well as Siberian unicorns, Mongolian sphinxes, and abundant sea monsters. And it offers a rare glimpse of a time just before British colonization in the Americas began, and the more familiar narratives of American history kick off. Indeed, according to an essay that accompanies the Ramsay Collection’s release of the map, Monte began working on his world map (or “planisphere”) on a particularly significant date for American history: 1585, the same year as the founding of the ill-fated Roanoke Colony.

The region known as “Terra Florida” had by the late 16th century become a well-known, if peripheral, Spanish colony. To the north, the colony of New France had made a small foothold along the St. Lawrence River, near present-day Quebec City. But between these two regions of “Florida” and “Arcadia” lay an enormous expanse of lands and peoples that Europeans had little first-hand knowledge of. Monte’s map makes no mention of place names that would begin to appear a few decades later, like the Dutch colony of New Amsterdam on the island of “Mannahatta” (1624) or the Jamestown settlement in Virginia (1607). But his map is not empty, either. Instead, the region between present-day Georgia and Maine is studded with long-abandoned place-names. The Maine coast is defined by a “Rio de Gato” (River of Cats) and “Capo de Molte Isole” (Cape of Many Islands). A mysterious city named “Ipedra” lies alongside a river cutting deep into the interior of the continent, somewhere in the environs of West Virginia.

Some of these place names are visible on other 16th century maps, such as the secret atlases produced in the imperial workshops of the Spanish empire in Seville. But other elements of Monte’s map are unique. For instance, he includes eclectic captions about the inhabitants of interior regions. “Here they are great runners,” he writes about a city labeled Nuremberga, seemingly near present-day Ohio. “They dress in leather.” At other points, Monte channels familiar legends. A caption north of Florida alludes to the legend of the fountain of youth (“This is not a country where life is finite”).

One striking element of Monte’s map is the abundance of indigenous American settlements that it recognizes by name. Monte has drawn and labeled cities throughout the Gulf region. Occupying the territories of the present-day states of Mississippi, Alabama, and Arkansas, they have names like Teschi, Suada, Mocora, Corue, and Cagnaneral. To the south, Monte has lavished attention on depicting what was then—and is still—the largest city in North America: Tenochtitlan, now known as Mexico City and labeled here simply as “Messico.”

Another segment of the map presents a rather confused picture of northern Mexico and the American Southwest. California is clearly labeled—and, unlike other early modern maps, very clearly not depicted as an island. To the north, in an area that seems to correspond to the southwestern U.S., is a crude sketch of two creatures along with a caption: “Here there are cows and bulls that have a hump like the camel, and have the appearance and tail of lions; the rest of them is similar to our Italian [cows].” In short: bison.

There are many other wonderful details throughout Monte’s depiction of the New World. Take, for instance, the humanoid sea monster pursuing a Spanish ship off the coast of Venezuela. But what’s most striking about this early depiction of North America is not its legendary beasts, but its more prosaic details. Monte’s map preserves details of peoples, cities, and places that in many cases still exist, but have histories that are too often overlooked in narratives of American history.

The two segments of the map corresponding to North America are reproduced at the top of this piece. Visit the David Rumsey Map Collection for higher-resolution versions. The team behind the map’s digitization has also figured out how to map the individual images onto a sphere using Google Earth, with beautiful results viewable here.