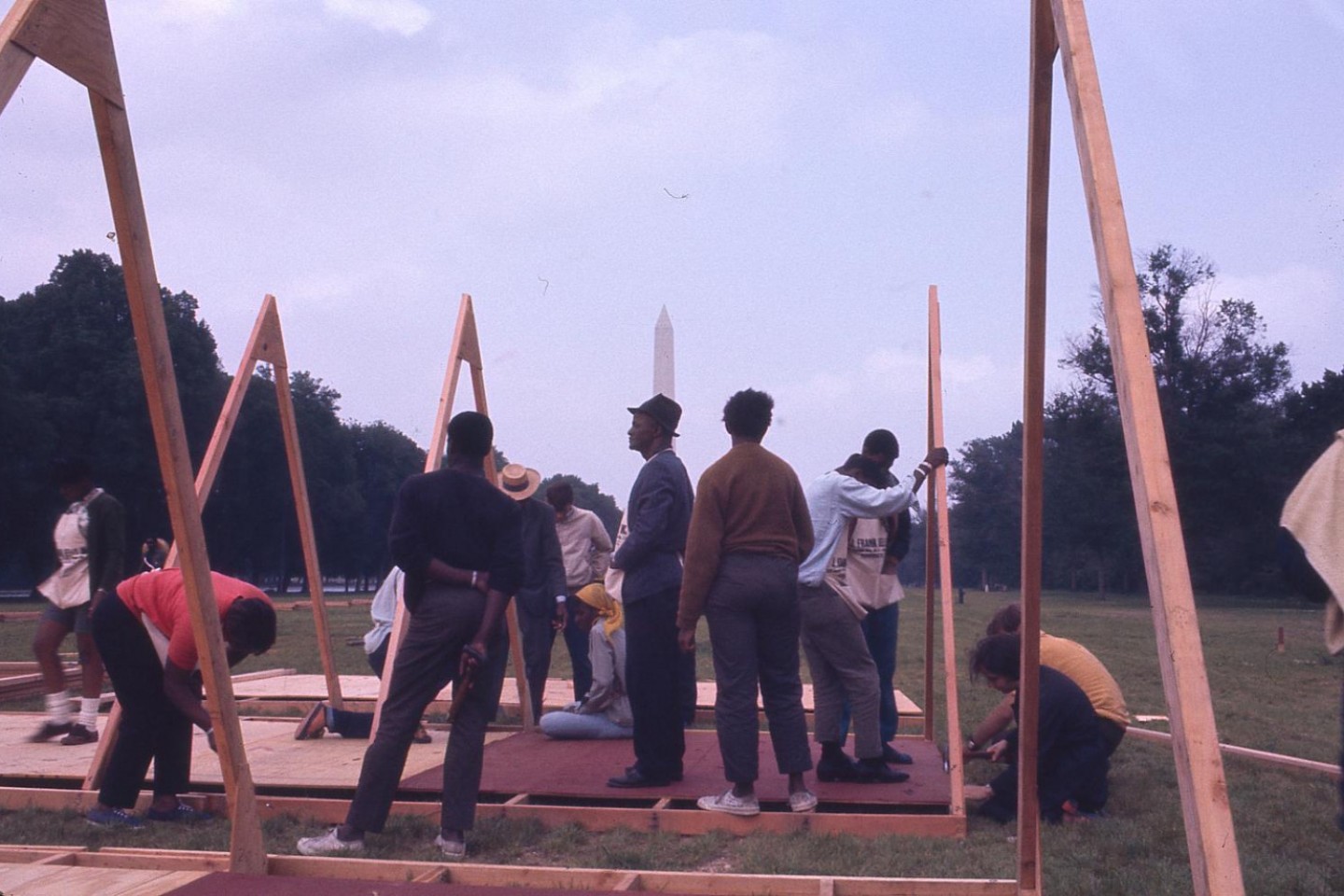 Participants in the Poor People's Campaign erect Resurrection City, a series of temporary shelters on the National Mall (May, 1968).
Robert Houston/Smithsonian National Museum of African American History and Culture

This Monday, the Poor People’s Campaign: A National Call for Moral Revival will launch a wave of voter registration efforts and nonviolent civil disobedience across the country. The campaign’s organizers aim to call attention to interlocking crises facing American society today, including voter suppression, the dramatic growth of wealth inequality, mass incarceration, militarism, and the erosion of the social safety net.

The campaign is a conscious homage to the Poor People’s Campaign of 1968, spearheaded by Martin Luther King, Jr. in the wake of urban rebellions in Newark and Detroit the prior summer. King was desperate to provide a nonviolent course of action for marginalized Americans whose needs were not being addressed by liberal reformists. In December of 1967, King called for “a new kind of Selma or Birmingham to dramatize the economic plight of the Negro, and compel the government to act.”

Four months later, King was assassinated. But his allies moved forward, viewing the campaign as a fitting tribute. They built a tenuous and contentious multiracial coalition that culminated in August, when tens of thousands of low-income people descended on Washington, DC for a six-week campaign of direct action. Their home base was Resurrection City, a tent city on the mall, and their goals were expansive. As Melvin Tom of the National Indian Youth Council articulated them: “guaranteed jobs, guaranteed income, housing, schools, economic development, but most important these things on our own terms.”

Few of these messages made their way to Americans watching at home. Instead, the mainstream media highlighted disorder in Resurrection City, rancor in the coalition, and the official response, which ranged from indifference to hostility. Commentators pronounced the Poor People’s Campaign a mistake at best, and a disaster at worst.

The first generation of historians to write about the protests echoed this assessment of the campaign. Their accounts, which tended to focus on King’s leadership and the movement’s national legislative achievements, were the easiest to research and the simplest to tell. If the core analysis motivating the Poor People’s Campaign troubled the consciences of northern liberals, the standard “Montgomery to Memphis” narrative most certainly did not. By and large, scholarly accounts from the 1980s and 90s offered a clear and compelling morality tale that flattered white American sensibilities: the American people and their representatives in Washington responded to nonviolent direct action, vanquished Southern racism, and mandated equal opportunity for all.

The timing of the Poor People’s Campaign made it irresistible as a symbolic coda to the movement’s days of glory. So, too, did the mud and disorder in Resurrection City and the campaign’s failure to win signature legislation. King biographers focused on opposition to the campaign among King’s advisors and largely ignored the campaign itself. So, too, did many civil rights histories. If mentioned at all, it often served as an epilogue. One 1997 synthesis lumps the Poor People’s Campaign, which it calls “a dismal failure,” into a chapter titled “The End of the Movement."

Several scholars made explicit what these histories left largely implicit, arguing that the Poor People’s Campaign was not merely a symbol, but a cause of the movement’s demise. To them, King’s ill-considered foray beyond “civil rights” reflected the movement’s overreach – a key reason that elected officials and the public turned away from the cause. Just as the rhetoric and style of Black Power activists frightened white America, scholars suggested, a movement of poor people demanding redistributive policies threatened the Silent Majority’s sense of fairness and self-interest. As the historian Gareth Davies saw it, calls for more dignified and generous income support shifted the movement’s approach “from opportunity to entitlement,” thereby placing it outside American norms of fairness and meritocracy. The movement had lost its mainstream appeal and its moral force.

Given this narrative, why would today’s activists revive what so many agreed was a misguided and failed effort?

The answer is to be found in the contributions of more recent scholarship. Over the past two decades, historians have broadened their view of the Civil Rights Movement, recontextualizing the Poor People’s Campaign within a more expansive “Black Freedom Movement” stretching back to the 1930s and 40s. From the “civil rights unionism” forged by tobacco workers in North Carolina to the robust and eclectic “Black Popular Front” of New York City, these scholars have highlighted the ways in which the movement’s early phase challenged the exploitative dynamics of racial capitalism. Eclectic national organizations like the Civil Rights Congress and the National Negro Congress, historians have discovered, wielded the language of human rights to challenge both American Cold War ventures abroad and racial and economic inequality at home. Seen thus, the Poor People’s Campaign of 1968 looks less like a perversion of the civil rights movement’s goals than a return to its social democratic roots.

At the same time, historians rediscovered the remarkable campaign for welfare rights. In the mid-1960s, women who relied on public assistance began organizing to demand dignity from social workers, higher welfare grants, and a “right to live” for all Americans. Multiracial but led primarily by African American women, the National Welfare Rights Organization held its own Poor People’s March in 1966. Its leaders agreed to join the Poor People’s Campaign only after King met with them and admitted his ignorance, and willingness to learn, about welfare policy and the plight of poor single mothers. Allying with welfare rights activists to lead a 1968 Mothers’ Day March, Coretta Scott King denounced poverty as a form of systemic social violence.

One measure of the Poor People’s Campaign’s potential was the intensity of the government’s response. Just as they had in the 1940s, federal officials went to great lengths to neutralize the movement. Its organizers were surveilled and harassed by the FBI, and routinely denounced on the Senate floor. Congress considered more than 75 bills designed to block the campaign. The Johnson administration’s hostility was palpable; an aide assigned to coordinate federal response labeled his folders, “Riot Control – Poor People’s March.”

Historians have also revealed the extent to which the legacies of the Poor People’s Campaign are more substantial than earlier scholars suggested. In his 2013 book Power to the Poor: Black-Brown Coalition and the Fight for Economic Justice, 1960-1974, Gordon Mantler detailed the campaign’s tangible victories, which included substantial increases in federal funding for free and reduced school lunches, Head Start, and Food Stamps. Moreover, Mantler argued, the campaign fueled subsequent organizing efforts among its participants, who returned home rededicated to organizing. They built neighborhood groups, public sector unions, and community development corporations. They registered and mobilized voters, blocked urban renewal projects, and expanded access to safety net programs. That they failed to stem the broader direction of American politics should not nullify their efforts or deny their historical importance.

This is the legacy of activism – still too often missing from history textbooks – that organizers of the 2018 Poor People’s Campaign are tapping into. It is a tradition of working-class people – regardless of race, national origin, or citizenship status – illuminating the interlocking mechanisms of power that deny them economic security, civil and political rights, and human dignity.

It is a tradition, we might also say, of historical actors doing historical work. For it was history that participants in the first Poor People’s Campaign turned to in the wake of the Civil Rights and Voting Rights Acts, when many middle-class and affluent white Americans believed that the playing field had finally been leveled. Where some attributed continuing inequalities to pathological cultures that rendered minorities unfit to compete in the “free market,” activists pointed to the long legacies of slavery and segregation, settler colonialism and Native genocide, and racialized state policies that effectively excluded people of color from economic security and upward mobility. In the years since, historians have picked up that structural analysis and run with it, tracing the evolution of white supremacy and the advance of predatory capitalism over the past half-century.

Fifty years after Resurrection City, historians are thus positioned to serve as much better allies in the struggle for social justice than they were the first time around. Through careful and creative research, they have shone a light on the complicated mechanisms that produce and reproduce inequality, challenged ahistorical and inaccurate narratives that justify it, and restored a more complete and usable history of social movement activism working to redress it. Looking back at 1968 in this light, what was once seen as a failure now looks a lot more like an unheeded call.